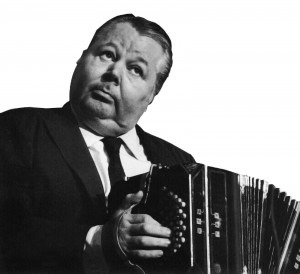 Welcome on board! Let’s continue our musical journey in the second largest metropolitan area in South America and the capital of Argentina – Buenos Aires. I talked of the “big four” in the Golden Age of tango music between the years 1935 to 1952. When Juan D’Arienzo is regarded as “King of the Beat”, Aníbal Troilo and Carlos Di Sarli are perhaps the complete opposite – the latter two cherish a beautiful tune more than anything else.

In the movie, “Scent of a Woman”, Lieutenant Colonel Frank Slade (Al Pacino) leads the timid young lady Donna (Gabrielle Anwar) to dance tango. And the band plays the spectacular Por una Cabeza (By a Head), written by Alfredo Le Pera and Carlos Gardel, one of the greatest tango singers. Gardel however, never sang for dancers. No one thought that it was possible to forge a relationship between singer and dancers, until Aníbal Troilo.

Troilo created a map to guide dancers through every vocal tango. The band first introduces an instrumental verse and chorus, about a minute later, the singer enters and sings the first verse and chorus. The second verse is never sung, but if the singer does come back for second chorus, it clearly is the end of a song. At that time, it was novel. Together with singer Francisco Fiorentino, they created some beautiful songs; among them En esta Tarde Gris (On this Grey Afternoon), beautifully interpreted by Geraldine Rojas and Javier Rodriguez.

It all began when Troilo was spellbound by the sound of a bandoneon in a café at the age of 10, 6 years later, he became a member of the renowned sextet led by violinist Elvino Vardaro and the legendary pianist Osvaldo Pugliese, who is also one of the “big four”. As a bandoneon player, he performed for a short time in Juan D’Arienzo’s orchestra, but soon, his creative impulse and entrepreneurial spirit led him to build his own tango orchestra, in which Astor Piazzolla played bandoneon and arranged music in 1939 – 1944. 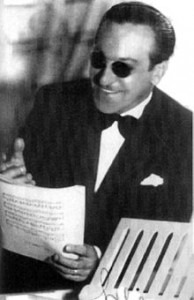 Another important man in Troilo’s professional life was pianist Orlando Goni. His talent was so great that he never played from the score, but to improvise and react spontaneously to the music and to the dance floor. Sadly, he drank himself to death two years after he left Troilo’s orchestra.

Aníbal Troilo is hailed as the best bandoneon player, however, in Carlos Di Sarli’s tango orchestra, bandoneon is almost inaudible. Di Sarli gives his melody to the violins. His music is perhaps the most lyrical and elegant, with subtle rhythm and instrumental color. Listen to Di Sarli’s Derrotado (Defeat) for the romantic and lush violins, particularly in the opening.

In Derrotado, you may also notice the bell-like sound from the piano. Di Sarli was a great pianist. Trained in western classical music, he was performing in public at the age of 13; but it was also in that year that one of his eyes was damaged by his father’s gun, forcing him to wear dark glasses for the rest of his life. He then left home to tour with a zarzuela company playing popular music and tangos. When the 16 year-old Troilo joined the famous sextet, at the same age, Di Sarli founded his first ensemble to play in a tearoom in his home town, Bahía Blanca; this marked the beginning of his lifelong career as a leader in his own tango orchestra.

Leading the orchestra in the dark, Di Sarli never played from the score, nor would he show his fingerings to the public. Even Troilo said that “El ciego se llevó el secreto a la tumba” (he took his secret to the grave), when Di Sarli passed away in 1960, aged 57.