Composers Inspiration
A Symphony of Life, Love, and the World
by Maureen Buja June 21st, 2016 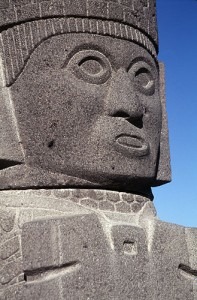 Requiring a large orchestra and with 10 movements, the first symphony written by Olivier Messiaen (1908-1992) was a monumental achievement. Commissioned by Sergey Koussevitzky for the Boston Symphony Orchestra, it took Messiaen 2 years to write it, completing it in 1948.

The Turangalîla-Symphonie takes its name from Sanskrit. It is to be pronounced ‘Too-rahn-ger-lee-lah’ and, according to Messiaen, means ‘song of love, hymn to joy, time, movement, rhythm, life and death’. The usual orchestra is augmented by extra strings (12 cellos and 10 double basses), 11 percussionists playing at least 16 different instruments, a solo piano, and an ondes Martenot (an early electronic instrument). The pianist also has several solo cadenzas to perform.

The work is built around 4 themes:

• the statue theme, which is supposed to be oppressive and brutal. It should evoke dread and Messiaen had in mind ancient Mexican monuments
• The flower theme, introduced by 2 clarinets
• The love theme – this is the opening theme for the 6th movement
• A chain of chords.

The 10 movements were given their names after the work as a whole was completed and makes use of the themes – developing them and changing their character by the end of the piece.

The Introduction uses the statue theme (00:33) and the flower theme as its basis but is a harsh cry out at the world. 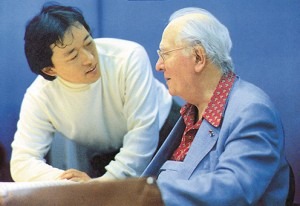 After the brutalism of the Introduction, the start of the second movement seems to continue the atonality. But, since this movement is entitled “Love Song,” we soon break into another mode: the brutalism is turned into passion while the strings have a much softer response. The sound like a slide whistle is the ondes Martenot.

II. Chant d’amour I
The third movement is the same as that of the whole work: Turangalîla. It begins with a theme in the solo clarinet that is interrupted by the brass. The woodwinds contribute a wandering theme.

III. Turangalîla I
And so the symphony goes. It was originally designed as a standard 4- movement work (Movements 1, 4, 6, 10), but then he added the Turangalîla movements (movements 3, 7, and 9), which he added for their rhythmic interest. He equated them with talas in Indian classical music. Then he added three more movements: 2: Chant d’amour; 5: Joie du sang des etoile (Joy of the Blood of the Stars); and 8: Developpement de l’amour (Development of love).

With all the dissonance and all the rhythmic activity, how can this end?

X. Final
We end, fortunately, with the love theme. Intellectualism is rejected for love and all the darkness and brutality of the earlier movements are wiped away. It’s a glorious ending to a very difficult work.

The Turangalîla-Symphonie is an extended meditation on love. Messiaen had been looking at the story of Tristan and Isolde for inspiration and it was their doomed love story that was behind this work and two others from this period. Unlike Wagner, though, he didn’t follow their story as one of illicit love, guilt and betrayal but as the gift of divine love – and that’s how he ends this work.