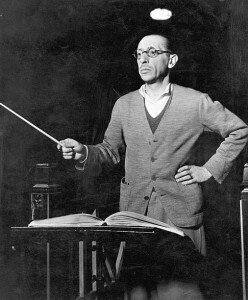 Dwindling economic resources and the unprecedented sufferings inflicted by the “Great War” forced composers to search for new avenues of artistic and musical expression. Taking refuge in Switzerland, the young Swiss conductor Ernest Ansermet introduced Stravinsky to the author Charles-Ferdinand Ramuz, and they collaborated on a Russian parable about a soldier who trades his fiddle to the devil in exchange for a magic book offering unlimited economic gain. Eventually unhappy with the bargain, the soldier plays a game of cards with the devil. He deliberately loses all his money and wins back his fiddle. He subsequently marries a princess, but the devil—still smarting from having been tricked—warns him to never to leave the castle. When the soldier decides to visit his sick mother, he finds himself once again in the clutches of the devil. 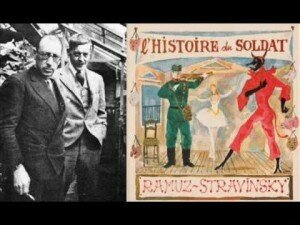 The whole project was conceived with a small theatrical troupe in mind. As such, Stravinsky had to write on a small scale, and that included three actors—the soldier, the devil, and the narrator—and a non-speaking dancer. And he chose seven instruments—violin, double bass, clarinet, bassoon, cornet, trombone, and percussion—to provide the musical accompaniment. Premiered on 28 September 1918 at the Théatre Municipal de Lausanne, Switzerland, Stravinsky openly acknowledged the importance of American popular music during the process of composition. “My choice of instruments was influenced by the discovery of American jazz. The musical ensemble resembles the jazz band in that each instrumental category is represented. The instruments themselves are jazz legitimates, except the bassoon, which is my substitute for the saxophone.” The premiere was a success, but an influenza epidemic forced the cancellation of the planned follow-up tour. It took several more years for this curious little masterpiece to establish a reputation, but whether it is presented as a miniature ballet or as a concert suite with narration, L’Histoire du Soldat is unique!