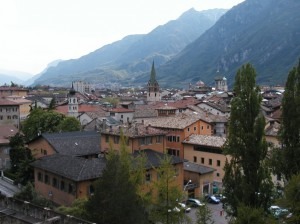 Picturesquely located in a glacial valley on the southern foothills of the Alps, the small town of Trento — also known as Trient — played a pivotal role in deciding the fate of the Roman Catholic Church. In 1545, 255 members of the high clergy, including four papal legates, two cardinals, three patriarchs, twenty-five archbishops, and 168 bishops descended upon the town to formulate a response to the Protestant revolt led by Martin Luther. Of course, these holy men brought with them a whole entourage of servants, lackeys and minions to make provincial life bearable. Known as the Council of Trent (Concilium Tridentinum), the esteemed members of the clergy stayed — with some interruptions — for 18 years! Thinking about such erudite topics as the function and future of music in the Catholic Church is hungry work. So the townspeople invented a dish to keep the Council well fed and gave it a rather ambiguous name.

“Strangolapreti” — a type of Gnocchi with breadcrumbs and spinach — might reasonably be translated as “Priest stranglers,” or “Priest chokers.” Traditionally served on Fridays, when religious restrictions forbade the consumption of meat, the little dumplings were a huge culinary hit. Council members could not get enough, and according to legend, would eat the dish until they choked. And that might actually have been the aim of the good people of Trento all along, hoping against hope that the entire religious caravan would finally go away! If all that talk about food has made you hungry, why not give the recipe, courtesy of Kathy Bechtel, a try: 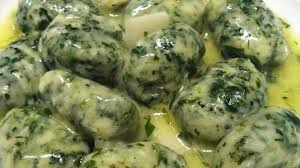 . Place the breadcrumbs in a small bowl, and cover with the milk. Combine to thoroughly moisten bread.

. Bring a large pot of water to boil, and season with salt. Add the spinach and blanch until tender, 2-3 minutes. Drain well, and immerse the blanched greens in ice water to halt the cooking. Remove from the ice water, and drain in a sieve, squeezing well to eliminate as much of the water as possible. Chop finely.

. Squeeze any excess milk out of the breadcrumbs (there should not be much, if any), and place in a medium bowl. Add the spinach, eggs, flour and grated nutmeg. Combine until the mixture just binds together and holds, adding more flour if necessary.

. Have a small pot of boiling water ready, and pinch off a small strawberry size ball of dough. Place it in the boiling water, and see if it holds together. If it remains intact, and eventually rises to the surface, you are all set! If it breaks apart, add a little more flour and try again. When you’re at the right consistency, continue on to the next step.

. Dust the counter with flour. Divide the dough into between 4 and 5 equally sized pieces. Coat your hands with flour, and take one of the pieces and place it on the floured countertop. Using the palms of your hands, roll the piece out into a ½ inch thick log, which will be about 18 inches long. Cut the log into 1-inch lengths, and place the individual strangolapreti onto a sheet pan that has been dusted with flour. Repeat with the remaining pieces of dough.

. Melt the butter in a large saute pan over medium high heat. When the butter is melted, add the shallots and chopped sage leaves. Continue to cook, watching carefully, until the butter solids begin to brown and smell nutty. Remove from heat, add the strangolapreti, and serve, garnishing with the whole sage leaves. Drizzle with remaining butter.

It goes without saying that the autonomous province of Trentino cultivates a number of delicious wines; no self-respecting member of the clergy would allow themselves to be marooned in the province without a steady supply of local wines. Take, for example the intensely fruity Teroldego Rotaliano, a robust red that grows exclusively in this region. Trentino’s finest reds — known as Caldaro or Kalterer — are produced from the Schiava grape around Lake Garda. Maybe you prefer the plum and wild cherry flavor of the Lagrein wine, or the bianco or rosato variety of the Valdadige. Once you have selected your wine to go with the Strangalopreti, make sure you listen to the music of Giovanni Pierluigi Palestrina, who according to legend saved polyphonic music from the Council’s condemnation. Wonder if the delicious gnocchi had anything to do with it?