Artists Behind the scenes
The Stage Manager- A Musician’s Best Friend
by Janet Horvath October 12th, 2014 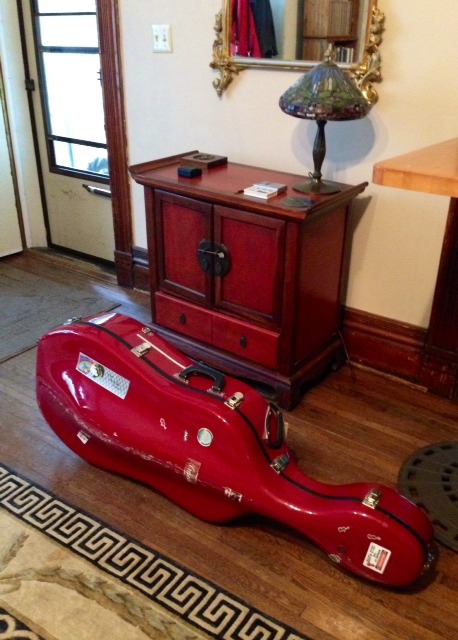 Stage managers of orchestras have a very important role. A good one takes expert care of our instruments and the musicians, soloists and conductors— meeting their every wish and whim. The stage manager is the one who announces, “Orchestra… On stage please. Orchestra on stage.” They’re the ones that proffer a towel to a sweating conductor and indicate to the soloists how to maneuver through the string section to get to center stage. They’re the ones who set up the stage and who know exactly the instrumentation for every piece. Different set-ups often occur in one program.

Not the least of their duties is packing up all the instruments and equipment when the orchestra is on tour— a huge job. Our stage manager, Tim Eickholt, now retired, was someone we trusted implicitly with our instruments. From a family of stagehands, he has an impeccable background as a master designer and builder and he had lots of experience with showbiz. He understood that musicians often hastily exit after performances to get some food and a beer. Tim was so conscientious that after concerts, especially on tour, he would check backstage for any belongings that might have been left behind. He’d find items of clothing like cummerbunds, shoes, belts or socks and worse— instruments, even unpacked. Once I woke up in the middle of the night in a panic, realizing that I had left my cello backstage. Fortunately, it was a local concert and Tim took my cello home with him. 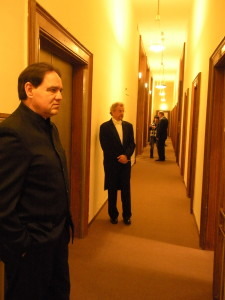 Tim at the ready at the Musikverien Vienna

One concert night the temperature dipped well below zero, as happens often in Minnesota. My warmest down coat was in for repairs. I borrowed my mother’s full-length mink coat to get to Orchestra Hall for that evening’s performance. I lugged the cello outside and into my car, which sputtered in protest when I tried to start it. On the highway my car lit up like a Christmas tree. Everything flashed. Then the car went dead. Somehow I got the car onto the shoulder.

Stranded. For a few moments I sat dumbfounded wondering what I was going to do. I couldn’t be late for the concert! But more important, I knew I couldn’t walk in this frigid weather carrying the cello. With trepidation I left the cello. I started running, in my full-length black mink coat, along the shoulder of the highway towards the nearest exit. A car pulled up and a man said, “Get in. It’s much too cold outside.” So I did, more worried about the cello than for my own safety. The driver took me to Orchestra Hall. I literally flew down the stairs directly to our stage manager’s office. In tears I told Tim that I had left my cello on the highway. We made a hasty exit and jumped into Tim’s car to find where I left my car, despite the fact that it was almost 8:00 p.m. There was no time to lose. The tow truck had already pulled up beside my car to take it away. Believe it or not we made it back in time for the concert.

There are endless stories of the idiosyncratic behaviors of soloists and conductors. Some artists demand peculiar foods to be brought in backstage. Others need their outfits pressed, fresh towels delivered, ice buckets with drinks, even stationary bikes (as in the case of Christian Tetzlaff) or personal chefs ( as in the case of Vladimir Horowitz) and every soloist was personally escorted to the wings of the stage. Tim, always respectful, handled it all. 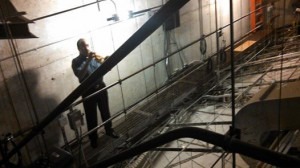 I remember when renowned violinist Henryk Szeryng came to play the Beethoven Violin Concerto—impeccably, I might add. During the rehearsal he found the stage much too bright. Over and over he said, “The lights, the lights…” Tim turned the lights down and down until the musicians on the periphery of the stage couldn’t see their music. Post haste, Tim had stand lights for all the bass players affixed to their stands.

Respighi
Pines of Rome
II. Pini presso una catacomba (Pines Near a Catacomb)
Other soloists need the heat turned up perhaps due to revealing dresses as well as trying to keep fingers warm. Tim would be the guy to take care of it. And when an offstage musician was required, he’d make sure everyone was set up in the audience balconies or stairwells backstage. Unless, as was the case recently with Ottorino Respighi’s Pines of Rome, for the spooky ancient catacombs movement the solo trumpet, Manny Laureano, was requested to play from the fourth level—a system of catwalks about one-hundred feet above the stage. Manny had to race up the narrow flight of stairs to dizzying heights, where there is no room for even a music stand, just a TV monitor hooked up so could get his cue.

Tim relates that as a very young man he was one of the stagehands at Northrop Auditorium for a new production of a Mozart opera when the Metropolitan Opera still came annually to Minneapolis. Tim was asked to hang enormous, brilliantly painted murals, which he had to install in the middle of the night. Little did he know that these were the very Chagall paintings that now hang at the Metropolitan Opera House in New York, which one can see through the windows as you approach the hall. He had no idea what he had in his hands.

Tim never failed to sit in the audience during rehearsals or concerts whenever he could. He always has perceptive opinion about the pieces being performed. And did I tell you that he’s a decorated Vietnam War veteran with a great ear and passion for classical music and the musicians? He especially loves Shostakovich.