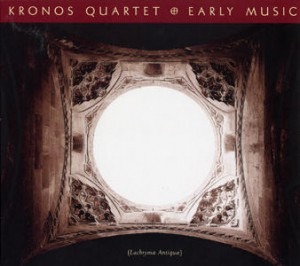 In 1997, the Kronos Quartet took a step back in time with their Early Music (Lachrymae Antiquae) [Ancient Tears] album, mixing quartet performances of medieval and Renaissance music with that of 20th century composers.

One of the most intriguing is the recording of Perotin’s ‘Viderunt omnes’. The arrangement for string quartet makes you hear the music in a new way.

Perotin: ‘Viderunt omnes’ (Tonus Peregrinus, Antony Pitts, cond.)
In the vocal recording by Tonus Peregrinus, you wait and wait for the vowels to change – the entirely of the first syllable of the word ‘Viderunt’ takes over a minute to say and the two words ‘Viderunt omnes’ come in at a five minutes. You’re cued to the vocal changes by the changes in the vowels – the nasal ‘I’ changing to the more open ‘e’ and then to the more shaded ‘u’ in Viderunt, for example.

Perotin: ‘Viderunt omnes’ (Kronos Quartet)
When you hear the instrumental performance, however, you concentrate on other matters. Without the words, you hear the interaction of the melodic lines, the repeated melodic ideas, and the resolution of dissonances. The instrumental voices seem more distinct – you hear the lower notes of the cello and viola whereas in the vocal version, the tessituras were so close that the overlaps made it harder to distinguish the voices.

Dowland’s ‘Lachrymae antiquae’ or ‘Flow My Tears’ as it is better known, takes an unexpected twist with the addition of two Chinese instruments, the ruan, in its large and middle-sized forms, played by Wu Man. 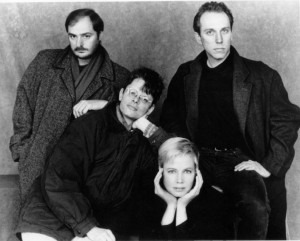 Dowland: ‘Lachrymae antiquae’ (Kronos Quartet with Wu Man on ruan)
In this case, however, I think the vocal performances bring something more than the purely instrumental one.

Dowland: ‘Flow My Tears’ (Rogers Covey-Crump, tenor; Jakob Lindberg, lute)
In Rogers Covey-Crump’s restrained version, you get the feeling of the despair and the tears in Dowland’s music. He can built on the text and the text repetitions to create a cumulative effect of despair. And, as he winds to the final declaration, “happy, happy, they that in [pause] hell,’ you know exactly how unhappy he is.

To move to the modern material on the recording, we have selections from Moondog, Harry Partch, John Cage and others. A curious piece is the work for prepared piano by John Cage, Totem Ancestor. The ostinato patterns and the repeated figures in the right hand make this sound like early Steve Reich.

John Cage: Totem Ancestor (Boris Berman, prepared piano)
But when you hear it arranged for string quartet, the early Minimalism feel seems to drop away and it comes into a different modern genre.

Cage: Totem Ancestor (Kronos Quartet)
One of the pieces that seems a perfect mixture of old and new is Uleg Khem, which is a song from Tuva, where the Tuvan throat singers add their inimitable throat-groaning, 3 traditional Tuvan instruments, and the Kronos Quartet slipping in and out behind everything.