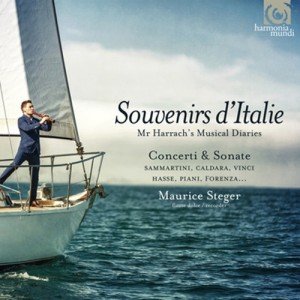 A memory box . . .
Charles de Brosses wrote that, in Naples, musical tastes change every ten years or so! That variety of tastes and colours is the hallmark of this recording devoted to the staggeringly virtuosic music for recorder brought back from Italy by a nobleman sent there by the Emperor as Habsburg Viceroy in Naples. Hasse, Vinci, Sammartini, and the less familiar names of Piani, Fiorenza, Leo and Sarro represent these souvenirs of a six-year gilded exile, which Count Harrach preserved in his precious manuscripts.