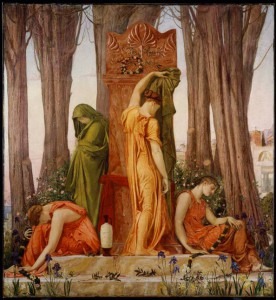 Laments continued to be very special works – rarely written and always filled with a very high emotional intensity. Elegies, on the other hand, were more of a late-19th-century phenomenon. Rather than heart-felt cries of despair, they were more like commentaries on a sad situation. The emotion was kept at a distance.

In music, an elegy is rarely a funeral piece but a work of a darker and more somber nature. In the medieval period, an elegy was about death, but by the time of the Romantic period, the elegy had become a personal reflection upon death. The Romantic period had a preoccupation with the idea of death and it’s no surprise that the elegy in music became so common from the late 19th century.

The French composer Jules Massenet wrote an eloquent elegy as part of the incidental music for a French verse drama called Les Érinnyes. In Act 2, Electra pours libations on the tomb of Agamemnon to the music called Invocation. When it was published separately as a work for cello and orchestra, it was called Élégie and is a wonderful introduction to elegiac music.

Massenet: Élégie (Harriet Krijgh, cello; Rhine Philharmonic State Orchestra; Gustavo Gimeno, Conductor)
We hear the crying lines in the cello, but at the same time, we’re being held back from the emotion – we are just observers.

Tchaikovsky’s troubled childhood and problems in St. Petersburg came to a good conclusion when he was sent to Moscow to study under Nichols Rubinstein. At the death of Rubinstein, Tchaikovsky wrote his Piano Trio in A minor and we can hear from the very first movement, the same kind of crying lines that we will come to associate with elegies.

Tchaikovsky: Piano Trio in A minor, Op. 50: I. Pezzo elegaico (Pierre Amoyal, violin; Frédéric Lodéon, cello; Pascal Rogé, piano)
When he heard of the death of Tchaikovsky in October 1893, the young Russian composer Sergei Rachmaninov immediately started work on his memorial to the great man.
Rachmaninov’s Trio Elegiac No. 2 is based on some of Tchaikovsky’s ideas that he used in his own Trio Op. 50. So in this elegy based on an elegy, Rachmaninov makes his own statement about Tchaikovsky.

The trio begins with the tolling of the death bell in the piano while the strings play melodies based on orthodox religious chant. The movement gradually builds until it almost takes on the character of a piano concerto. Again, we have the crying idea in the cello, but we also have the church bells in the descending motif that we first heard in the lament.

Rachmaninov: Trio elegiac No. 2 in D minor, Op. 9: I. Moderato – Allegro vivace (Trio Portici)
The following movements all contribute to this testimony to Tchaikovsky, but at the same time, to the up-and-coming new composer we are discovering in Rachmaninov.