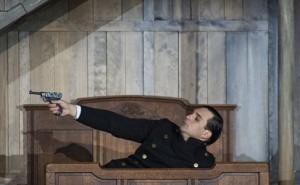 Every now and then the Salzburg Festival puts on a performance of such perfection, we are reminded how this festival became the leading operatic summer event in Europe. This year’s new production of Mozart’s Nozze di Figaro (Marriage of Figaro) was such an example. Under the artistic direction of Sven-Eric Bechtolf (currently also double-hatting as Festival Director) and the musical supervision of conductor Dan Ettinger, this Nozze had it all.

It was hard, if not impossible, to find anything to criticize about this production. And oddly, for a festival that prides itself on attracting the best known singers in the world, this was a largely a no-name affair. 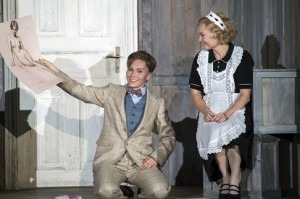 Figaro was played by young Czech bass-baritone Adam Plachetka who is not only an imposing personality, but also possesses a strong, flexible voice of great beauty. He was well matched with Swiss-Czech soprano Martina Jankova whose energetic acting, personal charm and vocal fluidity virtually lit up the stage. The Count Almaviva, who regrets having given up the privilege of the ius prima noctis (first night’s privilege), is portrayed by the young Italian Luca Pisaroni as a lecherous and selfish aristocrat constantly scheming to sate his libido. The Countess was young German soprano Anett Fritsch who is only now getting more exposure to the larger audiences. She possesses arresting vocal beauty and presents beautifully on stage, not just when suggestively pulling on her pantyhose. The show-stealer was Russian mezzo-soprano Margarita Gritskova, who gave her Salzburg debut in the role of Cherubino. Salzburg has a tradition of discovering and launching young talent that then turn into stars (e.g. Anna Netrebko and Nino Machaidze), and Gritskova will certainly go on to a great career. Possessing a strong and dark voice, the young Russian convinced not only on account of her impeccable technique, diction and control, but also thanks to her disarmingly charming stage presence. Her Cherubino was equally attractive as a boy or as a girl: believable, entertaining and delighting. Even the veterans blended in beautifully. Carlos Chausson engaged his thunderous bass as Don Bartolo, while Ann Murray teased every last bit of humour out of the role of Marcellina. 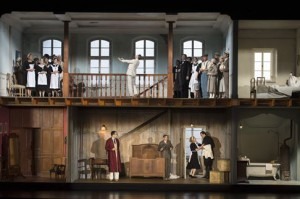 This was ensemble performing at its finest. The cast, including the chorus and countless supernumeraries were clearly having a great time themselves. The performers harmonized vocally and personally on every level, providing three hours of at times breathtaking entertainment. Who would have known that even the dry recitatives could be imbued with such dynamism and action?

The stand-out star of this performance, however, wasn’t a singer. It was the stage set. British designer Alex Eales created a universe in the Downton Abbey vein, with full side-cut views of an English country manor. The details of the set, from fraying wallpaper to fully equipped manor kitchen, were so authentic and lovingly executed, the action took on cinematic quality and intensity. The direction was clever, inventive and spirited, giving the convoluted story around a simple wedding both sense and meaning.

This Nozze looked so fun, with sets and costumes that were so appealing, one would assume that many in the audience would have paid extra to join the action on the stage. And at EUR430 a pop (if you are lucky enough to even get a ticket), that is saying a lot.