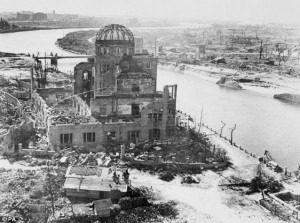 Every year on August 6, Japan becomes a nation of mourning. Seventy years ago, the city of Hiroshima was incinerated by an atomic bomb nicknamed “Little Boy.” Three days later the utter destruction of Nagasaki followed. At the human cost of more than 200,000 civilians, it brought World War II to a close. At the ceremony near the industrial exhibition hall in Hiroshima—which has been preserved as a skeletal monument to the attack—Prime Minister Shinzo Abe once again called for the worldwide elimination of nuclear weapons.

Masao Ohki: Symphony No. 5, “Hiroshima”
Meanwhile, the Dayton Air Show, annually held in the state of Ohio, USA, was gearing up for a re-enactment of the atomic bomb attack on Hiroshima with a pyrotechnic show dubbed the “Great Wall of Fire.” Dayton has featured the re-enactment of the bombing of the Japanese city for more than 30 years, happily celebrating the atrocity that ended the war and supposedly saved American lives. While the “Great Wall of Fire” will still explode, and the B-29 bomber representing the “Enola Gay” will still make a low pass in Dayton, the re-enactment label has been scrapped as it was deemed inappropriate for a family event. While certainly a step in the right direction, the justification completely misses the point. Some unspeakable events in human history—and regrettably there are way too many—can’t be celebrated with bubble gum, dancing bears and sponsorship by the coolest dishwashing liquid!

Since education turns out to be utterly hopeless—Japan itself is struggling to come to terms with atrocities committed by its own forces during the war—the only avenue to stimulate the critical discourse needed to avoid a repeat of the atrocities of history, is provided by the Arts. And a good starting point to approach Hiroshima might be the eyewitness testimony of the two artists Iri and Toshi Maruki. Over the span of 32 years, the couple produced a series of fifteen painted folding panels depicting the devastation of the atomic bomb and the terrible suffering it caused. And in 1953, composer Masao Ohki based his 5th Symphony “Hiroshima” on six of the “Hiroshima Panels.” In 1946, John Hersey wrote, “Few of us have yet comprehended the all but incredible destructive power of this weapon, and everyone might well take time to consider the terrible implications of its use.” 70 years on, isn’t it time we get started?