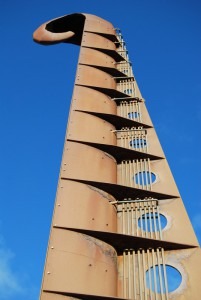 Some musical instruments, once constructed, no longer need additional human intervention to become musically active. One such instrument is the spectacular Blackpool High Tide Organ. Designed by Liam Curtin and John Gooding in 2002, the musical sculpture, described as “a cross between a tentacle and the staff of a violin,” stands about 15 meters high. The basic principle of this “musical manifestation of the sea” works on the premise that the swell of water at high tide pushes air up a number of inlet pipes attached to the sea wall, which causes organ pipes inside the sculpture to sound. The organ pipes are tuned in such a way that the sculpture produces musical chords based on the harmonic series in B-flat. Remarkably, the instrument is entirely played by nature. On calm days, the organ hardly makes a peep, but when the seas get rough it belches great lumps of sound. The tide organ, spectacularly, is a direct sounding representation of sea conditions.

Part of “The Great Promenade Show” series of sculptures—essentially a two kilometer outdoor gallery including artworks which interact with light, wind and waves—the tide organ is constructed in concrete, steel, zinc and copper. It combines hydraulics, acoustics, structural engineering, music and sculpture to create a unique work of art. The sculpture has won a number of important awards, and is lauded as “a wonderful example of how to successfully cut across science, technology and the arts to produce something truly innovative.” Liam Curtin, who envisioned and designed the sculpture, has always been fascinated with water. Prior efforts include floating sculptures, and fountains made of galvanized steel buckets. The idea of the tide organ struck him when he created a musical fountain that used a series of pumps linked to organ pipes. 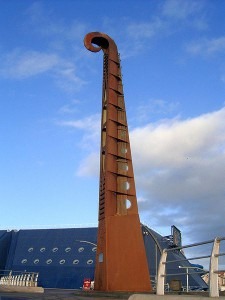 Temperamental and subject to mood swings and variations—just like human performers—the tide organ produces an effect that is “not unlike the work of minimalist composers such as Philip Glass, Steve Reich or John Adams, or in a way like the repeated patterns in contemporary music. Since it is “tuned to the harmonic series,” explains Curtin, “it sounds along with the rhythm of the waves, and its sound is more ambient than tuneful, although you do hear elements of tune and resolving discords.” Curtin is planning to commission a number of contemporary composers to improvise and create compositions that can accompany the harmonized strains of the tide organ. As it currently stands, the tide organ performs twice daily; once when the moon is directly overhead, and once when the moon is on the opposite side of the world. It starts playing about 2 or 3 hours before high tide and continues for about 2 hours after high tide. Apparently it plays loudest when the sea first laps up against the pipes, and becomes quieter when the sea rises above the wider pipes. It becomes louder again as the tide goes out, and on very calm days the organ will be silent for part of its cycle. You never know what to expect, as performances will be wild and frenzied on stormy days, and softly mellifluous on calmer ones.