Composers Anecdotes
Charlie Chaplin
The Fiddle and the Tramp
by Georg Predota May 17th, 2015 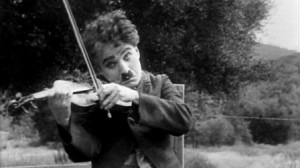 Did you know that Sir Charles Spencer Chaplin (1889-1977), probably the most famous and most important actor in the silent film era, was a committed amateur violinist who also composed a number of his film scores? Long before Chaplin contemplated an acting career, he turned to music to escape the abject poverty of his youth. Charlie grew up in the London district of Kennington with his mother, who had no means of income. As a result, the young lad was twice sent to the Central London District School for paupers. When his mother was committed to a mental asylum, Charles and his brother were sent to live with their estranged father. Charles Sr. was a severe alcoholic who died at age 38 from cirrhosis of the liver.

Given the dismal state of his upbringing, it is not surprising that Chaplin was looking for a way out. And initially, Chaplin turned to music. “I had great ambitions to be a concert artist, or, failing that, to use it in a vaudeville act,“ he writes. “Each week I took lessons from the theatre conductor or from someone he recommended. As I played left-handed, my violin was strung left-handed with the bass-bar and sounding post reversed.” Practicing his violin from between four to six hours a day, and combining it with his acting talents, Chaplin had become a rising talent in the English music hall by age 16. And soon his fortune changed as the prestigious Fred Karno Company signed him to an extended contract. On his second American tour, Chaplin was scouted for the film industry and began appearing for Keystone Studios in 1914. For his second camera appearance, Chaplin selected the “Tramp” costume with which he became identified, and by 1926 he was a global phenomenon.

Despite an insanely busy filming schedule, Chaplin always found time to play the violin. A press release of 1917 suggested, “Every spare moment away from the studio is devoted to this instrument. He does not play from notes excepting in a very few instances. He can run through selections of popular operas by ear and if in the humor, can rattle off the famous Irish jig or some negro selection with the ease of a vaudeville entertainer. Chaplin admits that as a violinist he is no Kubelik or Elman but he hopes, nevertheless, to play in concerts some day before very long.” Chaplin’s ambitions to appear on the concert stage seem to have cooled by 1921, as he suggested in an interview. “I used to play my violin a great deal up to a couple of years ago, but since then I’ve hardly touched it. I simply have lost interest in such things.” Maybe realizing that he could not seriously compete on the concert stage, Chaplin turned his attention to writing film music.

Chaplin had always been interested in composing, and he even started a music publishing company in 1916. Although this venture was not successful, he composed all his scores to motion pictures starting with City Lights in 1931. Since he was not a professional musician, he needed help in creating his scores. Chaplin would sing or play his tunes to the composers Davie Raksin, Raymond Rasch or Eric James, who would further develop and score the tunes. Chaplin composed three hit songs, among them “Smile” written for Modern Times in 1936. Impressively, Chaplin also received an Oscar for his theme to Limelight, awarded “Best Original Score” in 1973. As for his violin performances, Chaplin played twice on screen. In The Vagabond of 1916 he uses his violin to seduce a gypsy girl, and in the autobiographical Limelight of 1952, he played a faded music-hall star. Chaplin was a close friend of Jascha Heifetz, and at a party Heifetz picked up Chaplin’s violin and was unable to play it. Chaplin took the instrument and played some Bach, remarking, “You see! I am made inside out and upside down. When I turn my back on you on the screen you are looking at something as expressive as a face.”