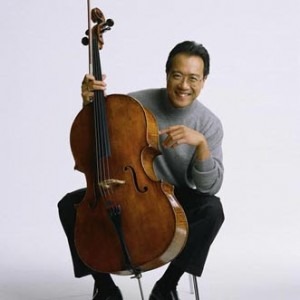 Leonard Rose (1918-1984) was one of the greatest cellists of all time! He was a cellist’s cellist who is still considered the ultimate model of lush and gorgeous cello playing. Rose excelled in every aspect of his musical craft and had tremendous success as a soloist, orchestral cellist, chamber musician and as a teacher.

One day the Istomin/Stern/Rose trio was rehearsing in Stern’s apartment, when Stern said to Rose, “Someone is coming to play for you after the rehearsal.” At the appointed time, a little Yo-Yo Ma arrived, only nine years old, with his quarter size cello. “Everything was from memory,” Rose recalled, “everything correct, and really quite well in tune, although the sound was very small…. I knew the boy had something, and that he was extremely gifted.” This turned out to be an understatement, as he immediately told Stern, “This is the best talent I’ve ever had! I can’t believe it, I just can’t believe it.” According to Rose, Yo-Yo came to every lesson perfectly prepared, and his first recital took place at Carnegie Hall in 1971. Yo-Yo was only 15 and a critic for the New York Times wrote “The cello recital he gave was of a quality to make many an older man green with envy.” And Rose offered the following assessment in 1984. “I am convinced that Yo-Yo will go down in history as one of the greatest cellists of all time. He is one of the greatest talents I have ever heard on the instrument, possessing not only a technique that is extraordinary and a memory that is equally extraordinary, very rare, but he is so musical and has such a personality and a sense of style! He has a beautiful sound on the instrument, and, of course, the thing that I absolutely adore about Yo-Yo is that he is one of the nicest human beings in the world.”

Yo-Yo was just as proud of Rose and of his association with him. “One of the marks of a great teacher lies not only in an ability to impart knowledge but also in knowing when to encourage a student to go off on his own. Rose represented the beginning of my conscious search for independence and individuality.” Leonard Rose died in 1984, and Yo-Yo wrote, “He was much more than my teacher. He was my mentor and my friend…He was a genuinely nice man.”