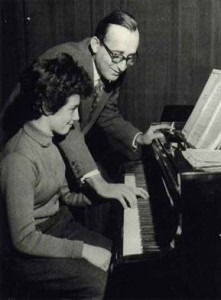 Around Martha Argerich’s 5th birthday, her mother placed her under the pianistic tutelage of Vicente Scaramuzza. Even though Mr. Scaramuzza was considered a sadistic fanatic, he gave her a superb technical grounding and laid the foundations for her unique cantabile style.

When Martha was asked at age 12 about her biggest dream, she unabashedly told President Peron that she wanted to study with Friedrich Gulda in Vienna. And Peron made it happen! Gulda had won the International Geneva Competition at age 16, and his lifelong passion would be to break down the barriers between the classical music and jazz idioms and successfully combine the two genres.

Gulda, like Martha, was a free and eccentric spirit! Both were fiercely independent, allergic to the rules imposed by career, fame, agents and concert halls. Martha admired Gulda for “his spontaneity, curiosity, and a love for music—for all music, not only for classical. He was such an open-minded person, so vital in this sense. He told me once ‘you have to learn everything before turning sixteen because later on gets a little stupid!’

She was fascinated by his sound and by the paradox of his controlled expressiveness. Argerich acknowledges Gulda as her biggest pianist influence. He recorded their lessons, and made her critique her own performances. He also told her to learn Ravel’s Gaspard and Schumann’s Abegg Variations in five days. “I did not find it difficult at all,” she said, “because I did not know it was supposed to be.” Argerich was Gulda’s only student, and she studied with him for only 18 months. Unimpressed by her subsequent fame and the personal chaos that surrounded her, he cried upon meeting her later, “What have you done with your life?” Essentially, we are talking about 2 extroverted recluses producing chaotic brilliance at the piano! A great number of pianists play difficult pieces and many photograph well. However, it is “her naturalness of phrasing that allows her to embody the music rather than interpret it.” Her native language is music, and she warmly credits Gulda with “having taught me how to listen.”