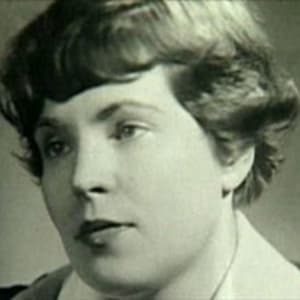 Leningrad / St. Petersburg composer Galina Ustvolskaya (1919-2006) was considered to be one of the most gifted of the students of Russian composer Dmitry Shostakovich. She studied with him from 1937 to 1947 and it is rumoured that he even proposed marriage to her (she declined). She could produce large serious works on big questions such as loneliness, death, and God. But she had another side that captured the lighter side of life.

In 1955, she wrote her Children’s Suite, which included all kinds of children’s games including tag, a toy ballerina, a dance by bears, and a walk in the woods.

What makes the work interesting is that this isn’t orchestral music dumbed down for children, but serious composition for an educated audience, even if they were children. The pieces are short, most are under 2 minutes, but they are interesting and good pieces of music.

The opening piece, ‘Morning’, starts with bells. The morning is one of love and affection.


We then go on a morning walk, and you can almost see the children in their outdoor clothes walking around the city. There’s a bird in the tree, someone comes by whistling a tune, and life goes on around them.


Compare that with the bear’s dance and we see how Ustvolskaya heightens the danger and the humor all at once. We have the heavy step of the large bear but we also have involuntary focus of the crowd and their joint fear and delight.


The contrasting game of tag has children (and violins) darting everywhere.


The final movement closes the day down with ‘Evening’. Again, the bells start the movement and our Morning music returns, but now with sunset rather than dawn in its sound.


As an artist, Ustvolskaya found a difficult time in the Soviet system. Her work carries a spiritual element that was an anathema to the Soviet ideas and for a long time was just written ‘for the drawer,’ i.e., never to be performed in public. Before 1993, only two of her works had been recorded – the Children’s Suite was one of them. This changed with the fall of the Soviet Union. The first serious recognition for her work started in the 1980s after a concert of hers in Leningrad. A Dutch audience member was so struck by her work that he quickly arranged concerts in Europe and by the mid-1990s, international festivals of her work were being arranged (1995, 1996, 2005, and 2011 in Amsterdam, 1998 in Vienna, 1999 in Bern, 2001 in Warsaw, and 2004 in Bastad), and Sikorski purchased the rights to publish her works. When she sought to emigrate to the west, all requests were declines.

For every atonal and challenging Violin Sonata (1952) she wrote, there were also the nationalistic works, including Dawn over the Homeland (1952), Fire on the Steppes (1958), and, of course, the Children’s Suite (1955). Unlike Shostakovich, who kept these ‘duty’ works in his catalogue, Ustvolskaya dropped those works from her listings. Nonetheless, even if repudiated by their composer, the Children’s Suite remains a grown-up work for children.