Artists Interviews
The Silver Voice on the Silver Screen
An Interview with Grace Davidson
by Maureen Buja August 16th, 2018 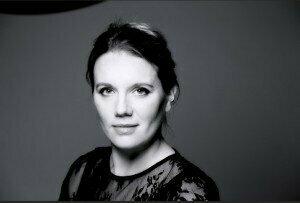 You’ve heard her voice but never seen her perform, she’s been in all of your favourite movies but you won’t recognize her. She’s been in Thor: Ragnarok, Pirates of the Caribbean: On Stranger Tides, The Hobbit films 2 and 3, The Escape and dozens more. Still not familiar? This is soprano Grace Davidson, who has sung in all of those films.

We spoke the other day on the occasion of the release of her vocal version of ‘Yumeiji’s Theme,’ written by Shigeru Umebayashi for Wong Kar-Wai’s elegant and melancholic film In The Mood for Love (2000). The original, with violin solo, received over 6,000 streams a day and Ms. Davidson’s vocal version brings the work to a more intimate level.

Ms. Davidson indicated that transforming a melody written for a violin to the human voice was quite difficult – the range of the violin is greater than the normal singing range so covering the extended 3-octave range was a challenge.

The Hobbit: The Desolation of Smaug: The Feast of Starlight

Ms. Davidson is a graduate of the Royal Academy of Music with a specialty in Baroque singing. Her most recent recording came out in July 2018 of the music of Handel and Vivaldi. This recording, with the Academy of Ancient Music, gives us the drama and virtuosity of Handel’s Silete Venti, where the entry of the voice stills the agitated winds of the opening sinfonia.

Handel: Silete venti, HWV 242: Symphonia – Silete veneti (Grace Davidson, soprano ; Academy of Ancient Music)
One composer who she works with frequently is Max Richter, a post-minimalist British composer, touring with his work Sleep, which will be part of the 2018 Antwerp Baroque Festival in September.

Richter: Sleep: Dream 8 (late and soon) (Grace Davidson, soprano; ensemble; Max Richter, piano)
It is in tracks like this, and Yumeiji’s theme, that the clarity of Ms. Davison’s voice is shown to its greatest advantage. She said that often, when composers write for a high boy’s voice, she’s the performer who can deliver the sound, because the music may be beyond the capabilities of a young singer.

Another music genre where she has invisibly appears is video game music. The epic World of Warcraft franchise is one sound field she’s appeared on. WoW started as a strategy game and then became a Massively Multiplayer Online (MMO) Role-Playing Game (RPG) that is now in its 7th expansion, so a great deal of new music has been needed. The latest WoW release is 14 August, so keep your eyes and ears open.

We asked how she split the world between being a top Baroque singer and singing, by her count, on over 100 film tracks. For her film work, sight-reading is critical. Often there are only 2 or 3 run-throughs before the recording starts. Know the composers and their styles is one part of the equation, and knowing what sound they want is another. For the recent graduate, she advocates cultivating knowledge of composers and conductors is key to film work.

Her current projects range from a recording for Signum Records of Dowland’s first book of lute songs (1597)with lutenist David Miller due out in October to film work on Serenity, where she sings all the ‘boy ‘ solos (music by Benjamin Wallfisch), The Delivered (music by Thomas Clay), and Mary Queen of Scots (music by Max Richter).

Dowland: Book of Songs, Book 3: Me, me and none but me (arr. C. Forshaw) (Grace Davidson, soprano; Christian Forshaw, saxophone; Steve Lodder, organ)
Michael Price’s album Tender Symmetry, recorded in a number of National Trust properties across England, will be released on August 31st and she can be heard there as well.

She’s currently touring with the Live Projection Performances of The Lord of the Rings films that are appearing in the US and Europe (schedule here).

Busy! You can find out more about her varied activities on her website.

Once you’re familiar with her voice, you’ll start to hear just how active she is! Keep an ear out for truly wonderful and ethereal voice.

Grace Davidson will be performing with Max Richter in HK on November 30th and December 1st.