Opinion
The Role of a Teacher
To Demolish and Rebuild, or to Plant and Nurture?
by Charlotte Smith June 30th, 2015 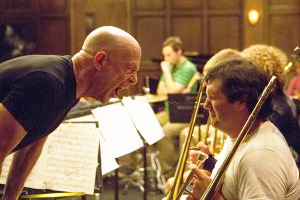 ‘Intense.’ ‘Gripping.’ ‘Unsettling.’ ‘Must-see!’ Several people have asked me whether I have seen Damien Chazelle’s film, Whiplash, and these were words they all used to describe the drama. Though apprehensive about films centred on musicians or on musical genres because of the usual mediocre approximations, my curiosity got the better of me and I found myself watching the trailer one evening. Two hours later, I found myself still glued to the sofa, albeit with sweaty hands, after watching the film in its entirety, having immediately purchased the film on iTunes (thanks to the merits of modern technology)!

The film was electrifying. The competitiveness that makes or breaks a musical career is dramatically portrayed – perhaps just enough to make audiences not familiar with a musician’s life feel the fickle and fleeting nature of this industry. The political nature of music conservatoires is also conveyed. In most of these institutions, real power is only given to a handful of professors; if you do not study with them, it is unlikely that you will get many opportunities or much exposure. In Whiplash, if you are not in Terence Fletcher’s band, then you might as well forget about a musical career.

Then there is the student-teacher relationship, which for me is the most interesting as I have been at both ends of the relationship. My teacher and mentor, with whom I studied for seven years and am still in touch, grew up in Soviet-era Moscow, and her teaching manner is not the hold-your-hand, always-give-you-encouragement style. I remember being ripped into pieces during every class in my first year with her, and having to fight back tears every now and then. It was not so much that she was demanding, but the fact that we would often spend an hour working on two lines of music, which when coupled with her tone of voice ‘oh well… not really…’ made me think I was completely not worth her time, and that she did not believe in me. After six months, I got to know another student of hers quite well, who had been studying with her for a long time, and he reassured me that it was quite the opposite. He told me I had to understand that she came from that unforgiving kind of training and hence that was what she believed in, and explained that she had no reason to take me on if she did not have any faith in me. She is someone who gives her students her all – though we were all technically allocated a one-hour class with her once a week (that was how much she got paid by the music college), one class was usually two to three hours, and she would make time for all her students so that on average we would have two sessions with her. When performances or competitions came up, she would see us every other day, if not every day. It was only because she had such high standards for us and did not give us compliments unless we truly deserved them, that we became so focussed and driven.

Of course, this style does not suit everyone. I have indeed come across past students of my teacher who only recall vivid memories of her cutting comments and of their struggle to ‘please the unpleasable’, and who sadly refer to their experiences with her as being destructive. As a music teacher now, I am always trying to find the balance between being positive and encouraging, and over-nurturing. It definitely takes time, as each student is different, and I think it is essential to build a bond with the individual first to get his or her trust and respect. Because the majority of my students are children under the age of 12 who have not necessarily chosen to learn the instrument at their own will, I tend to be on the gentler side, as I hope to inspire some interest first. And indeed, what makes me happiest and makes my job most rewarding, is not when students win prizes or get distinctions – don’t get me wrong, of course I am delighted when they do well – but rather when I have truly inspired them and made them enjoy music a little more, or when I have simply made their lives a little brighter. But once they are on board and when I feel they are determined to excel and confident enough to withstand criticism, I give them less leeway as I need them to discover themselves what they are truly capable of when they put in 200% hard work.

Perhaps, like a romantic relationship or even a doctor-patient relationship, finding a suitable teacher for a child is all about finding the right fit. But as Truman Capote once said, ‘Anyone who ever gave you confidence, you owe them a lot’; I believe every teacher or mentor should aspire to be that ‘anyone’.