Blog
Of Proms and Promming
by Frances Wilson July 1st, 2015 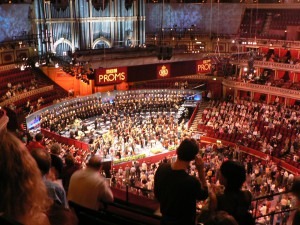 The 2015 BBC Proms start in two weeks’time. As a child and teenager, I used to go to the Proms every year with my parents, who would pour over the programme as soon as it was published (this, of course, is many years pre-internet, and the Proms booklet would be for sale in bookshops and newsagents). I heard a wide variety of music, and I loved the vast scarlet-and-gold interior of the Royal Albert Hall, its plush red seats and that special “Proms atmosphere”.

The Proms have not always been resident at the Royal Albert Hall. The concert series was pioneered by a Mr Robert Newman, and its first home was the Queen’s Hall on Langham Place, close to where the BBC has one of its main offices and newsroom. In those early days, the programmes were far more varied, and somewhat eccentric or lacking in coherence (a trawl through the BBC Proms Archive site reveals some interesting programmes, cram full with a huge variety of music in one single concert), and often included unscheduled musical offerings. For example, the violinist Fritz Kreisler liked to warm up both himself and the audience with an unprogrammed “appetiser” such as his own ‘Praeludium’. Robert Newman conceived the Proms to encourage an audience who would not normally attend classical music concerts, enticing them with the low ticket prices and a more informal atmosphere. From the earliest days, “promenading” (standing) was permitted, as was eating and drinking. Smoking was also allowed, though patrons were requested “not to strike matches between movements or during quiet passages”. After Newman’s sudden death in 1926, Henry Wood took over the directorship of the concert series. The Proms took up residence at the Royal Albert Hall in 1942 after the destruction of Queen’s Hall, though they moved again during the war to Bedford Corn Exchange, home of the BBC Symphony Orchestra since 1941, and remained at this venue until the end of the war. 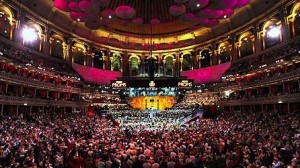 What is so wonderful about the Proms is that the original spirit in which they were conceived continues today. There is still the excitement of the launch of the new season’s programme (today heightened by numerous trails and teasers across the social networks). As you approach the Albert Hall there is a buzz of excited expectancy amongst the people milling around the hall, queuing to “promenade” (pay a fiver and stand in the arena, or up in the gods), or for returns at the box office. On a fine summer evening, the gilded Albert Memorial, opposite the Hall in Hyde Park, gleams in the setting sun.

Inside, the hall vibrates with the hum of 5000 people in that special state of eager expectation a few minutes ahead of the start of a concert. The orchestra is taking their places, the ‘prommers’ claiming their ‘pitch’ in the arena or high up in the gods. Above the stage, a plush red and gold velvet swag proclaims that these are the ‘BBC Proms’. Then the formalities begin, first with the arrival of the assistant leader of the orchestra, then the leader, and finally the ‘master of ceremonies’, the conductor. With the raise of his baton, the evening’s entertainment is underway. 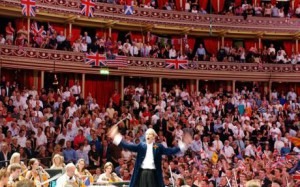 Too often people are put off attending classical music because they perceive it as stuffy, elitist and populated by (largely) snooty octogenarians who demand hushed reverence. But at the Proms everyone is welcome. In recent years, the programmes have become more “populist”, with themed concerts such as a Dr Who Prom. Music snobs and critics may throw their hands up at this, but these concerts can be a great way of introducing classical music to people who may have no previous knowledge nor experience of it. The atmosphere inside the Albert Hall is friendly and good-natured, with its special Prom traditions: the Prommers always yell “heave-ho!” as the piano lid is raised, for example. And if people applaud during movements, so what? To me, it’s a spontaneous, instant response to something they have enjoyed (in fact, the habit of not applauding between movements had not existed before the twentieth century.) So, hip hip hooray for the Proms and all they stand for – and long may they continue.