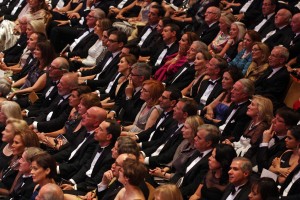 A concert is an occasion, an event, and as such has its own special etiquette and “rules of engagement”.

As the audience we have certain responsibilities, including arriving on time, sitting quietly during the performance, showing our appreciation for the performer and being courteous towards our fellow concert-goers and the performer, who has worked so hard to create this performance to share with us.

The age of the smartphone constantly threatens to disrupt these “rules” (coughing and the noises of living, breathing human beings are acceptable aspects of the live concert experience), and venues continually remind audiences to turn off their phones (and other electrical devices such as watches with alarms) prior to the start of the concert. It is, sadly, all too common for a phone or two to go off during a performance, but generally this is tolerated and met with a sigh or tut from audiences members (fortunately, I have never been party to the kind of reaction as described in this article).

But it’s not just a ringing phone which can disturb concert goers: I was forced to watch most of a concert by Yuja Wang at London’s Queen Elizabeth Hall via the video function of an iPhone belonging to the person seated in front of me. Not only is it generally forbidden to film or photograph at concerts, it is also extremely distracting to have a phone screen glowing in the gloaming of the concert hall. And at a concert at Wigmore Hall, where the acclaimed Russian pianist Igor Levit completed his Beethoven Sonatas odyssey, the young man seated on my right checked his phone every 10 minutes, presumably to check in with his Facebook chums. This was done silently but the lit up screen was an intrusion on my enjoyment of the concert. It does make me wonder why people bother going to concerts if they can’t do without their phone for a couple of hours. It is also discourteous to the performer: never mind that we were sitting in Row X – if you’re checking your phone, you’re clearly not concentrating on the performance!

In a programme of late Beethoven no less. Why would one even go if one isn’t prepared to put everything aside for those sonatas?

Of course performers have responsibilities to the audience as well. In creating a concert, the performer makes a virtual “contract” with the audience (and a formal one with the venue/promoter), and the audience is complicit in that by attending the concert and fulfilling their side of the arrangement, as noted above. In a recent blog post, music journalist and writer Jessica Duchen describes a concert where the performer seemed displeased that the hall was only half full and manifested his displeasure via his performance. Whatever was going on with the performer, it seems singularly unfair to the audience to treat them with antagonism. They have, after all, paid to hear you play (that “contract” again) and even if you’re tired or ill, you have made the commitment to perform. Sometimes performers, or the venue front of house manager, will say a few words ahead of their performance to explain why they have changed the programme or to apologise in advance if they are unwell or have had a rushed journey to the venue. Or the venue will print an apology in the programme.

Then there are the responsibilities of the venue towards performer and audience. The vast majority of venues are very well run, with friendly, helpful staff and pleasant areas and bars where people can meet and socialise. Performers are well-looked after with proper facilities to warm up and get changed, important aspects which help make the performer feel comfortable and at ease (as far as possible) ahead of the concert. But I have come across stories of performers being told to change the programme at short notice, because the promoter demands it, and a recent case where the performer arrived at the venue and was not permitted a proper warm up on the piano, nor was the tuner given an appropriate amount of time to prepare the instrument. There was no green room, and no refreshments. Of course the pianist gave the recital, because she is a professional, but I suspect the experience left a sour taste in her mouth and it is unlikely she will hurry to perform at the same venue again.

A concert is a shared experience, with shared responsibilities. When these coalesce in a virtuous circle of good practice, courtesy and commitment, we should all be guaranteed an enjoyable and engaging experience.