In Rossini’s The Barber of Seville, we are introduced to the ever-enterprising Figaro. He solves Count Almaviva’s courting problem with Rosina by thwarting her guardian’s marriage intentions. Count Almaviva and Rosina appear again with Figaro in The Marriage of Figaro, set in 1786 by Mozart. These two operas come from a set of three plays written by Pierre-Augustin Caron de Beaumarchais in the late 18th century. 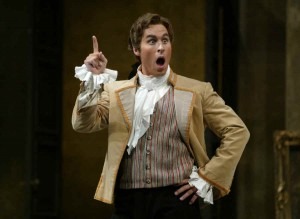 Written between 1773 and 1791, the years spanning the French Revolution, the three plays, Le Barbier de Séville, Le Mariage de Figaro, and La Mère coupable, show the change in social mores before, during and after the Revolution. In The Barber of Seville, we have the strict guardian who has designs upon his young ward, the free-ranging noble who is able to get his desires, and the conniving barber who follows his own likes and dislikes. In The Marriage of Figaro, a satire on the aristocracy, Count Almaviva has fallen out of love with his Countess, the former Rosina, and is pursuing Suzanne, Figaro’s fiancée. The Count also has a lover in the young Fanchette. This time we also have the character of Chérubin (Cherubini in Mozart’s opera), the Count’s page and godson of the Countess, who is desperately in love with every woman he meets and who the Count finally sends off to be a soldier. In Mozart’s opera, his aria, ‘Voi, che sapete che cosa è amor,’ (You, who know what love means) is emblematic of his youth and desires.

Mary Garden in the title role of Chérubin, 1905

Mozart: Le Nozze di Figaro: Act II Scene 2: Arietta: Voi, che sapete che cosa è amor (Ann Murray, Cherubino (mezzo-soprano); Vienna Philharmonic Orchestra; Riccardo Muti, cond.)
La Mère coupable (The Guilty Mother) is set 20 years after The Marriage of Figaro. The Countess and Chérubin had a night of passion before he left for the army (he dies in battle), and the young Léon is the result. The Count has his own illegitimate child: his daughter Florestine. It’s up to Figaro and Suzanne to save the day, preserve the Count’s fortune from a fortune-hunter, and to get the Count and Countess back together to celebrate the wedding of their (unrelated) children Léon and Florestine, who have been secretly in love.

We know Rossini’s Barber and Mozart’s Figaro¸ but operatic settings of La Mère have not really entered the repertoire. André Grétry (1741-1813) made a start on one but didn’t finish it. It wasn’t until 1966, 180 years after the play was written that Darius Milhaud completed his opera La mère coupable. It remains rarely performed. 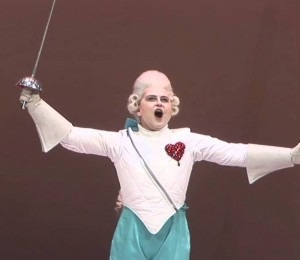 It was Jules Massenet (1842 – 1912), however, who kept the beloved character of Cherubini from The Marriage of Figaro, the feckless Chérubin, alive. When we leave him in Mozart’s opera, he’s headed off to the army. In Massenet’s Chérubin (1903), the sex-mad Chérubin has joined the army and is celebrating both his first military commission and his 17th birthday. A farcical romp ensues, brought on by Chérubin lusting after each of the female characters and causing chaotic confusion. He passes notes to the Countess, seduces a Spanish dancer, flirts with his commanding officer’s wife, is challenged to a duel by the Count, and ends it all by marrying Nina, the Countess’ maid.

Massenet: Chérubin: Act I: A cette joie, a ce printemps (Michelle Breedt, Chérubin (soprano); Giorgio Surian, The Philosopher (bass); Cagliari Theatre Orchestra; Emmanuel Villaume, cond.)
As you can hear in this excerpt, there’s more dialogue than singing, but we can also hear that Chérubin is no longer the young boy with desires of Mozart’s world, but has grown into a man. The use of dialogue throughout the opera, foreshadowing Richard Strauss’ ‘talking operas,’ made the opera unpopular with French audiences. However, Massenet wrote with the singer Mary Garden in mind for the lead role and Lucien Fugère as The Philosopher and their brilliance carried those first performances to perfection.

For scenes from Massenet’s opera