In Tune Society
Song as the Great Leveler
An Interview With Sam of Choir With No Name
by Maureen Buja March 9th, 2019

We often talk of charities that speak for those who have no voice. In this case, we have a charity that gives the homeless a voice – an organized voice in a choir. Founded in 2008 with a mere 4 members, Choir With No Name (CWNN) has gone from one small choir in north London to 4 choirs across England: London (running in partnership with Look Ahead Care & Support), Birmingham, Brighton, and Liverpool. The choirs meet once a week following the schedule of: 6:30: Tea and biscuits, 7:00-8:30: rehearsal, then dinner and conversation. The London choir, which combined two earlier choirs in north and south London, has around 70 members. While the choir rehearses, volunteers are cooking dinner for them. The food for the dinner is donated by corporate sponsors, including one that has its own charity built around collecting good but unsaleable food from the local supermarkets. Last week, 70 people were happily fed for the cost of £5.00. It’s not always that easy, and monetary donations do much to supplement the charity donations, but at the end of the evening, the choir has met and was fed, and, more importantly, has talked to each other.

Choir With No Name

Sam has been the choir director of the London Choir for 6 ½ years, starting first with creating the south London choir and, later, when the north and south choirs were joined, as director of the new ensemble.

Sam regards the choir as a ‘well-being’ choir. It’s through activities in the choir that his homeless singers gain so much: a solid and dependable meeting, an activity that engages the whole body, a support system filled with other people who have gone/are going through the same life shock, and lifeline through music. Being in the CWNN gives its members confidence, a sense of home, a sense of community, and there’s nothing like the buzz you get after a successful performance!

The choir does no advertising and new members come by word of mouth–friends helping friends. As choir leader, Sam goes around to the homeless hostels, does workshops with the choir, and helps those who need it find this musical resource. He finds singing to be a great leveler of humans: you may have no money and no home but you do have a voice and he has a place for that voice. 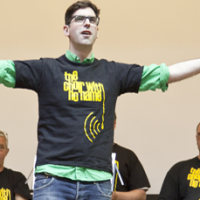 We asked if there were any CWNN ‘graduates,’ and he spoke of one man who had always been a great singer in the choir, but was pulled down by his drug use and homelessness. Once he found his voice, his downward spiral was reversed and he now has a position in a gospel choir. Some of his singers nay lose their way but find their way back to the choir as their life goes in cycles. Choir members look out for each other, providing support and the necessary hospital visits for those in need.

Their musical remit is ‘quirky pop/rock’ and Sam does his own arrangements for the choir. The choir makes suggestions of songs they’d like to sing and Sam tends towards inspirational songs. On their website, music samples include ‘Where is the Love’ by the Black-Eyed Peas, ‘Don’t Give Up’ by Peter Gabriel and Kate Bush, and Jack White’s ‘Seven Nation Army.’ In their upcoming show with the Yale Glee Club, ‘Don’t Stop’ by Fleetwood Mac, ‘Harvest for the World’ by the Isley Brothers from the mid 1970s, will be joined by ‘This is Me’ from The Greatest Showman. These are all statements of affirmation, of looking forward, that the choir can sing with great meaning.

The challenge for the choir director is that few members of his choir can read music, so music is learned by memory. Sam noted that music with repetition was easier to teach than through-composed! His few music-reading members often beg to see the music, but by and large, the music is taught the same way it’s been taught since the 9th century – repetition and repetition and repetition. Since he knows the choir so well, Sam is able to make arrangements that work to their strengths – to the people with the good solo voice and the group that does a good internal ensemble.

CWNN takes music to the streets, literally, and what the street dwellers give back is a positive affirmation of the role of music in the world. CWMM will be performing with the Yale Glee Club on 13 March at St. James Piccadilly. Come to hear two different musical traditions meet with a single voice.