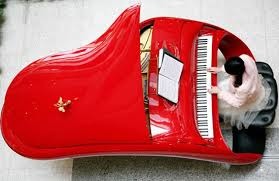 Apparently, it is rather common practice to take the most expensive cars straight from the factory to a tuning shop. These specialists outfits tweak engines to produce the raw horsepower of the space shuttle and attach all manner of exterior glittery and space-age parts. Frequently, the inside cabin of the car is completely remodeled to the individual tastes and tattoo designs of the proud owner. It might be hard to believe, but somebody in the Schimmel Piano Company, originally founded in Leipzig in 1885 but currently operating from Braunschweig, asked himself the simple question “why don’t we try this with a piano?” 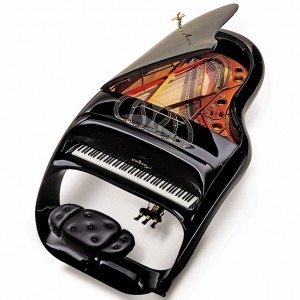 Throughout its history, the Schimmel Piano Company produced high quality concert grand pianos, among them the Concert Chamber CC 208, from its 6’10 grand series. So Schimmel handed the sound-producing portion and the patented keyboard and action assembly to the rather eccentric industrial designer Luigi Colani, and told him to pimp the piano. Colani originally started his designing days with the car giants Fiat, Alfa Romeo, Lancia, Volkwagen and BMW, and graduated to furniture in the 1970’s. From then, he reimaged household items, television sets, uniform sets, trucks and even entire kitchens. Colani has a somewhat unconventional design philosophy, one that has left him largely an outsider from the mainstream of industrial design. “The earth is round,” Colani explains, “and all the heavenly bodies are round; they all move on round or elliptical orbits. This same image of circular globe-shaped mini worlds orbiting around each other follows us right down to the micro-cosmos. We are even aroused by round forms in species propagation related eroticism. Why should I join the straying mass who want to make everything angular? I am going to pursue Galileo Galilei’s philosophy: my world is also round.” 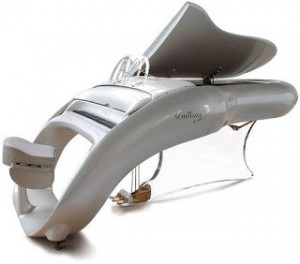 And thus, the designer who hates straight lines went to work and envisioned a bio-design, “which uses a vocabulary whose inspiration comes from organic shapes and sensuality.” It even features an ergonomically curved keyboard! This curved keyboard, so we are told, “allows the player to perform effortlessly without having to move your body. It is like driving a high-performance car.” According to reliable testimony, “you can actually perform to a higher level with less effort, and far more flawless than you thought possible.” Supposedly, it gives the “player a closer feeling of becoming part of the music.” The instrument also features an electrically operated hydraulic lid that allows the performer to control the specific amount of desired projection. And if you want to play a duet with your sweetheart, the fully adjustable and integrated piano stool can easily modify in width, height, and distance to the keyboard.

Named “Pegasus,” after the divine winged stallion of Greek mythology, the instrument appears to be launching into midair. All this is made possible by the acrylic support beneath the main fiberglass body weighing in at a hefty 580 kilograms. Only 14 Pegasus models have been produced, and owners include Prince, Eddie Murphy and Lenny Kravitz. If you ever have the chance to purchase one, as you might easily imagine, bring a large wallet. This specialty piano does not come cheap, but it does come in three colors, black, white and red. It won’t make you play faster or turn you into a better musician, but your Selfie will look rather stylish on your favorite social networking site, don’t you think?