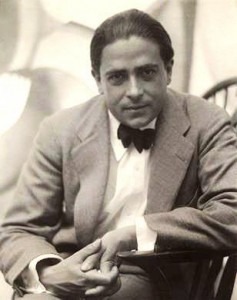 A current exhibition at the Museum of Modern Art in New York is a retrospective of the works of Francis Picadia and of its relationship to the various artistic movements of his time – and significantly, to the Paris of the 1920’s.

Picabia was born in 1879 in Paris to a Spanish/Cuban diplomat father who had made his fortune from a sugarcane plantation, and a French mother who came from a wealthy bourgeois family. Even as a child, Picabia showed a precocious talent for painting. He was admitted to the Ecole des Arts Decoratifs, where he initially produced paintings in the style of the Impressionist painters Pissarro and Sisley. However, following his own advice even in his early years — “…. allowing thoughts to change direction” he moved quickly through cubist, fauvist and orphist stylistic periods. His independent wealth allowed him to travel to New York to show several of his paintings in the famous Armory Show of 1913. Alfred Stieglitz, the famous photographer, showed many of Picabia’s ‘mechano-morphic’ abstract-style portraits of himself and his friends in his studio 291 (at 291 Fifth Avenue, New York City). Most of these works were based on Picabia’s statement “it flashed on me that the genius of the modern world is machinery”. However, it is important to note that the Italian and Russian Futurists, such as Ecco, Boccioni, Tatlin and Malevich, had already moved in the same direction. Traveling frequently between New York and Europe, Picabia created the literary magazine ‘391’, named in honor of Stieglitz, which served as a platform not only for his poetry, but also, with the help of his friends and like-minded artists, became a convenient venue from which to attack the contemporary literary and artistic establishments. 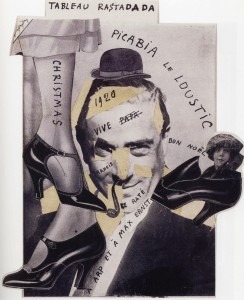 Many of the artists of his time, having come of age around the turn of the 20th century, were very much affected by World War I. Switzerland became their political refuge, where Tzara, Ball and Huelsenbeck started the DADA movement in Zürich’s Cabaret Voltaire. They conceived DADA as an opposition to rationalism, which, according to them, had failed to prevent the war. The word ‘dada’ is nonsensical, i.e., it is thought to replicate the babble of babies, but in different languages its meaning shifts — in French it refers to a ‘hobbyhorse’, in German to ‘where, where’, in Russian to ‘yes, yes’ and so leaves the interpretation of its meaning always open. DADA became an important artistic movement in its various expressions in literature, painting, sculpture, theater, film and music, focusing on chance, abstraction, humor and the unconscious. 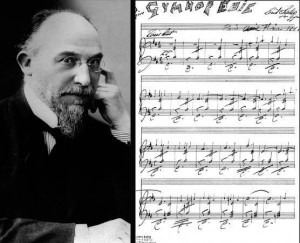 In 1919, Picabia contributed to the Salon d’Automne in Zürich, and with Tristan Tzara, to the publication of DADA 4-5. Returning to Paris, he became one of the leading protagonists (with Marcel Duchamps and André Breton) of the DADA movement in France. Picabia’s painting ‘L’Oeil Cacodylate’/The Cacodylic Eye was shown in the Salon des Indépendants to the great consternation of the general public. The depiction of the subject began with Picabia’s drawing of an image of an eye and of the medicine (Cacodylate) he used to treat his own eye infection; its creation continued as a collaborative work of signatures, graffiti, doodles and contributions from over fifty of his friends, illustrating the Dadaist concepts of humor and chance. Virtually all DADA activities let to constant controversies and agitation in the literary and artistic scene, while at the same time inspiring great collaborations with artists of film, ballet and music. 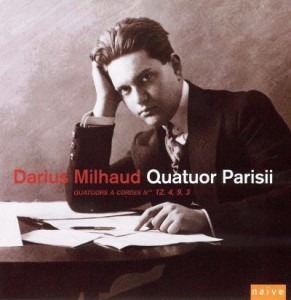 Eric Satie and Darius Milhaud in particular seemed to have shared similar ideas in many of their compositions. Milhaud’s composition and ballet Le boeuf sur le toit/The ox on the roof (created in collaboration with Jean Cocteau who used clown figures as dancers; stage design by Raoul Dufy) evokes the sound of the carnival with the title taken from a popular Brazilian folksong. His composition La création du monde/The Creation of the World draws upon jazz, which Milhaud discovered in London and New York. His arrangement for the ballet Salade, later reworked as Le Carnaval d’Aix, a fantasy for piano and orchestra, uses the characters of the Commedia dell’Arte. A similar setting can be found in Satie’s ballet Parade, which invokes the ‘artificial’ world of the circus, and the so-called ‘real’ world outside. The collaboration in Parade between composer, dancer and painter brought together Diaghilev, Massine and Picasso. The score included the utilization of unusual instruments, such as a typewriter, siren and pistol– “found sounds” — finding an equivalent in the depiction of machines in Picabia’s paintings.

In 1924 Picabia and Satie collaborated in the ballet ‘Relâche’ (meaning ‘cancelled or closed’ – referring to the performance and/or the theater) — an interesting title for something about to be performed! During the intermission a film ‘Entr’acte’ was shown, written by Picabia and directed by René Clair. The film started with bright lights directed at the audience, blinding them; then Picabia, as a character in the film, fired a cannon at the camera and audience, followed by Duchamp and Man Ray playing chess on a roof top until they are washed away in a flood; someone is shot, mourners are shown leaping behind a hearse pulled by a camel; the hearse becomes a run-away hearse with mourners running after it through the countryside, until the coffin is thrown in a field with a magician emerging, who then makes everyone, including himself, disappear — a typical Dadaist/surrealist production, which must have been startling to the Parisian public at the time. 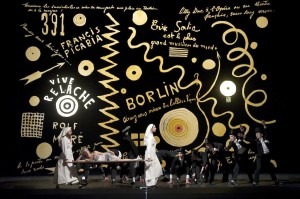 This film is also shown in the current exhibition at the MOMA, giving us a taste of a Dadaist performance and the amazing artists who contributed with their imagination, humor and skill to one of the most interesting artistic periods of the 20th century.

Entr’acte (1924) is a short film directed by René Clair, which premiered as an entr’acte for the Ballets Suédois production Relâche at the Théâtre des Champs-Élysées in Paris. Relâche is based on a book and with settings by Francis Picabia, produced by Rolf de Maré, and with choreography by Jean Börlin. The music for both the ballet and the film was composed by Erik Satie.

The cast included cameo appearances by Francis Picabia, Erik Satie, Man Ray, and Marcel Duchamp. The conductor of the orchestra at the premiere was Roger Désormière.

In this (definitive) edition the soundtrack was conducted in 1967 by Henri Sauguet.