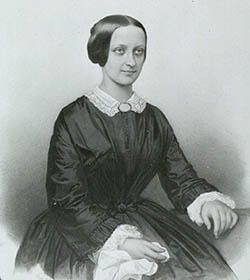 As long as anybody could remember, Niels Gade had always been in love with music! He taught himself to play a variety of instruments, and started composing at a super early age. Once his musical education was formalized, he steadfastly devoted the rest of his life to his musical calling. So nobody was particularly surprised when Gade showed no appreciative interest in members of the opposite sex. The first hint of the subject of matrimony comes from a note to Clara Schumann on 6 September 1851. “Instead of the hermit of old, a happy bridegroom writes to you today,” he quips. “It is probably known to you that I have abandoned single blessedness. My dear betrothed is the daughter of your friend, Mrs. Hartmann, who, alas left us too soon.”

The referenced Mrs. Hartmann turns out to be Emma Hartmann née Zinn. She was a highly successful Danish composer who published under the pseudonym Frederick H. Palmer. She married the composer J.P.E. Hartmann in 1829, and gave birth to ten children. And it was her daughter Emma Sophie Amalie Hartmann who married Niels Gade in 1852. Married life significantly increased his musical productivity. “My music is getting on well,” he writes, “Apollo and Cupid are not strangers to each other.” As a wedding present for his new bride he composed the Spring Fantasy (Foraars-Fantasi). A sunny and untroubled work of glimmering atmospheres and textures in the style of Mendelssohn, the work also features a rather prominent part for the piano. And Gade also collaborated with his father-in-law on the ballet score Et Folkesagn (A Folk Tale). Written for the dancer August Bournonville, the ballet reflects the atmosphere of Danish folklore without quoting any actual folk music. Gade supplied the bright, festive music for the outer two acts, while Hartmann wrote the darker moody music for the inner act. The work is still considered the finest work in the Danish ballet repertoire.

Niels Gade: Spring Fantasy, Op. 23
With his personal and professional life flourishing, Niels Gade was brutally reminded of the cruelty of life as personal tragedy stuck after barely 3 years of marriage. 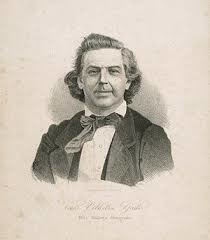 Sophie was carrying twins, and doctors from the very onset, had been concerned for her welfare and the health of her babies. The ominous medical predictions sadly came true, and Sophie died during childbirth! While he was mourning the loss of his wife, he wrote to Clara Schumann, who was concurrently loosing her husband, “We follow with fervent interest the news that reaches us concerning the ominous state of his health, and we all hope that God may turn it to the best end. Only he who confides in the guidance of the Lord has consolation for his disquieted and mournful heart that can help him to bear up under sorrow and pain.” After a 2-year period of mourning, Gade fell in love with Mathilde Staeger and asked for her hand in marriage. She bore him two children, and the son Axel Wilhelm Gade followed in the footsteps of his father and became a violinist, conductor and composer.

In a series of letters to his second wife, Gade presents himself as a most devoted husband and loving father. He always addresses his wife in terms of deep affection, and even illustrates his correspondence with little pen sketches. While on his way to the Beethoven Festival in 1871, he writes from Hamburg. “Whenever I see in a window a photograph of a little girl or of a little boy, I naturally think of my little ones, so that I do not care the deuce for my trip and for the Beethoven Festival.” And after a rehearsal in Amsterdam in 1873, he writes, “Following rehearsal today I went home, thanked God, brought out your picture and kissed it fervently. I shall always carry it with me, together with pictures of the children.” Fascinatingly, his letters also allow for rare glimpses into the world of performance. During his first visit to the Leipzig theatre he wrote of Schroder-Devrient, “A large almost colossal figure, magnificent action, a (formerly) beautiful voice, and, not to forget this, a really artistic conception of the roles.” And from Paris he reports, “You may believe me, the orchestra played magnificently; twenty of the very best prime violins of Paris—it sounded accordingly.” Gade sailed the troubled waters of life with stoic dignity. His efforts on behalf of art extended from his early manhood to the very day of his death, and his firm and true love for his relatives and friends constituted the fertile foundations for his musical imagination.