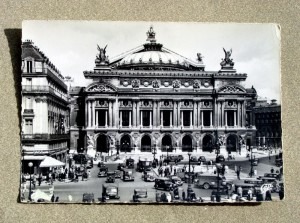 What was the Paris Opéra Ballet like six decades ago? My Uncle Arnold was posted in France after the Second World War in 1946. A dedicated music aficionado, he could hardly wait for his furlough to attend the ballet. This is what he related about his experience:
(written in early 1946 by Arnold Rosenberg)

Although hunger is stalking the arts in Paris today, one cannot help feel the drive and persistence of Parisians to get back on their feet again. The French are remarkable despite war, enemy occupation, severe rationing and hunger, they take great pride in their outstanding cultural achievements. Call it escapism if you will, but to those who know the French people it seems rather indigenous courage and determination to preserve their culture and way of life, despite all handicaps.

Artistically, Paris is now as brilliant as ever. True, musical and artistic organizations have suffered somewhat in quality, but they still manage to turn out an almost perfect product even in 1946. Top-notch Jewish performers were ousted during the war from their posts with orchestras and ballets, and afterward, artists were forced to leave because of their collaboration during the occupation. Of those who remain, besides endeavoring to do first class artistic work, many are forced to seek other employment in order to maintain a living wage. Rehearsal hours are short and inadequate in number, but these dedicated artists take it in stride.

Despite everything, Paris can boast five first-rate symphony orchestras, two grand opera companies and one of the finest ballet companies in the world. Concert halls and opera houses are packed every night with enthusiastic audiences. Of course people are starved not only for bread but beauty.

The remarkable Paris Opera ballet, together with its exceptionally fine school of dance, performs for the ballet programs and for operas in which ballet is required. The Opera ballet, even today, stages some of the lushest dance spectacles in modern theater. It is a remarkable organization, despite losing the two pillars of the Paris ballet due to their collaborationist activities — Serge Lifar and Yvette Chauvire. There are many Parisians who would just as soon forget their misdeeds and welcome them back. On almost every kiosk and billboard in that city, someone has managed to rubber-stamp the words, “Vive Serge Lifar!”

Part of the glamour of the Opéra ballet is due no doubt, to its home Le Théatre National de l’Opéra de Paris, the opulent, rococo structure standing so regally in the center of the Place de L’Opéra. Although its construction was completed in 1874, its stage now is technically equal to the Radio City Music Hall of New York. In 1936, when the stage was completely rebuilt, a mammoth, 21-ton “cyclorama” was installed. It is a huge, sky-blue metal shell, moved up and down in a matter of seconds by a touch of a button which, when used for open-air scenes, gives an illusion of infinite space. The floor of the stage is a maze of trap doors, elevator platforms and revolving stages.

The heavy schedule of the Paris Opéra includes three or four full length ballets each Wednesday evening, and on other evenings they perform the dance sequences in operas such as in Samson and Dalilah and Faust. Gounod’s opera Faust did not fare well at its Paris premiere so Gounod was asked to add a ballet to it before the opera was launched again. It is interesting to note that of all the productions of Faust to be seen the world over, the production of the Gounod work at the Opéra is perhaps the only one which includes the ballet. To this day, every performance of Faust in Paris is sold out due to lovers of the ballet. In fact, even when an opera does not require a ballet, one is usually added for Paris audiences!

The Allied forces were given a Christmas gift in Paris last December by the Franco-Allied Goodwill committee — an amazing spectacle called How a Ballet Dancer is Made; How a Ballet is Produced. The first half of the program was devoted to portraying the training of a ballerina from the time she first enters the school until she is ready to take her place among the stars.

The second half of the program featured the production end of ballet. After a fragment from the ballet Castor et Pollux, all of the props and scenery were removed from the stage. We in the audience were given a breathtaking view of the entire stage — twice as deep as the auditorium. We could see in the distance the sumptuous ballet practice room with its mirrored walls and crystal chandeliers. Members of the audience sitting in side boxes could barely see that far back although they leaned out as far as they dared! The entire corps de ballet then took part in a grand march from the practice room up to the foot-lights at the front edge of the stage — probably the most spectacular extravaganza ever attempted at the Opéra. Then when the stage was completely empty, the stagehands took over to demonstrate how they erect a set, which included the lowering of the gigantic cyclorama. That would’ve been enough for us young army men, most of whom had never seen anything like this, but they chose to end the program with the second act of The Two Pigeons, the Opéra’s most successful ballet. Unforgettable!

The Paris Opéra ballet school is one of the most thorough schools of its kind in existence today. Not only are the Opera’s feature dancers trained there. Many of the people in the so-called Russian ballet companies in the United States have also received their training at the Opéra School. Moving through the strict hierarchy from the bottom up takes 12 to 15 years of technical study until the dancer is named a “first dancer” or star.

To an ambitious student of the ballet in Paris, 1946, becoming a star, receiving the adoration of the audience and winning public approval, is much more important than mere war or hunger. To a ballet artist dancing makes of the human body a work of art in movement, and it seems to liberate them from the ordinary laws of other mortals.