Starting from 6:00am on July 19 at Times Square New York City – known as the “crossroads of the world”- a digital billboard has been displaying an unique poster to endorse opera featuring Xu Zhong, President of Shanghai Opera House and internationally renowned conductor and pianist, amidst all the colourful and dazzling screens. Over the week, every day from 6:00 to 24:00, this poster will be displayed on an hourly rolling basis.

The Times Square in New York City is one of the busiest pedestrian streets in the world, as well as an important cultural centrepoint in the U.S. and the world. In addition to a dazzling array of commercial advertisements displayed on the popular outdoor screens at the Times Square, public service advertising is also shown here subject to a strict selection process, usually featuring extremely outstanding and influential artists and art institutions in the world. This time, the opera-themed poster featuring Xu Zhong as President of Shanghai Opera House appearing at the Times Square is a manifestation of both Xu Zhong and Shanghai Opera House’s growing international recognition. This is not only a successful overseas promotion of the Shanghai Opera House, but a powerful demonstration of Shanghai’s soft power. 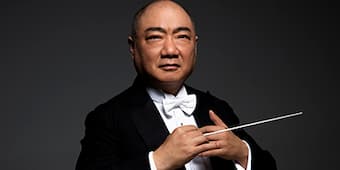 An internationally renowned Chinese conductor, Xu Zhong was appointed as President of Shanghai Opera House through a global recruitment in 2016, and since then he has not only promoted Shanghai Opera House’s cooperation with world-class production teams and artists, but presented Aida, Turandot, Nabucco, La Fille du Régiment, Falstaff, Der fliegende Holländer, Das Land des Lächelns and a series of classic opera productions that have ignited the market. Meanwhile, he has also committed to creating and producing original Chinese operas including Morning Bell, Tian Han, Shen Nong, as well as reviving Chinese opera classics such as Sister Jiang, Songs of the Long March, Ode to the Yellow River, China My Dearest Mother, etc. In recent years, under his leadership, Shanghai Opera House has toured around the world: twice to London, to Germany’s Saarbrücken Music Festival, Estonia’s Saaremaa Opera Festival, and to Dubai Opera House for its 2019-2020 Season Opening. Such international exchange has allowed the world to witness the power of Shanghai’s culture and the development of opera in China. At the beginning of 2020, as the first Chinese opera conductor to take stage at the Sydney Opera House, Xu Zhong lost no time to initiate a “Global Music Relay” to fight against the COVID-19 when he learned of the pandemic during the rehearsal of Don Giovanni with Opera Australia. After the pandemic spread globally, he also launched “Music One World”, a 24-hour radio program on World Earth Day and showed the world the social responsibility of Chinese musicians and institutions. In 2019, Xu Zhong was invited to conduct l’Orchestre de Paris for the first time and won nearly ten minutes of applause when the performance ended. In 2021, he became the inaugural International Chair in Opera by the Royal Welsh College of Music & Drama and was the External Expert Observer of the BBC Cardiff Singer of the World 2021. These are undoubtedly signals showing that Chinese musicians’ artistry and opera’s development in China are gradually attracting the attention and recognition of the world.

From September 3 to 5, Xu Zhong will conduct the Orchestra and Chorus of the Shanghai Opera House and join hands with the world-famous soprano He Hui to present the opera double bill Cavalleria Rusticana & Pagliacci, launching the new Season of Shanghai Opera House – a series of wonderful programs will be shown on stage, as Shanghai Opera House make steady progress in accumulating repertoire and polishing revived pieces as well as new production of the classics.