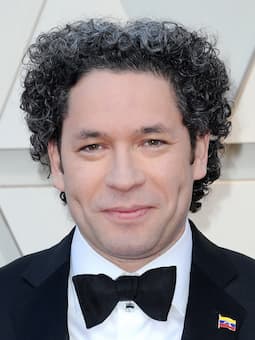 Son of a trombonist and a singing teacher, Gustavo Dudamel was born 26 January 1981 in Barquisimeto, Venezula. In this city full of crime and drugs, Gustavo initially took violin lessons, but he had a favorite game as a child. He remembers “having little toy soldiers, but not with guns. I would put them into orchestral positions, and then I would put on some music, and I would always be the conductor. It was fun.” Gustavo joined “El Sistema,” the state-run music education program in his native country for children from communities living below the poverty line. 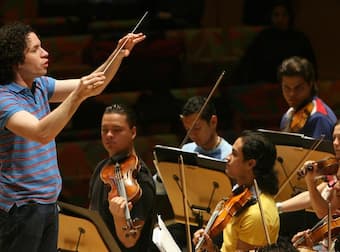 “El Sistema” places social responsibility alongside musicianship, and older students act as mentors for their younger peers. One day, Gustavo remembers, “I was in rehearsal and the conductor was sick, and the podium was empty, so I thought, OK, and I took the baton. I hadn’t studied. I just thought, I can do this. And it was funny, because my friends were there, playing. And they all laughed. But within five minutes it had changed. They all thought, OK, it’s time to work now. And that was beautiful. Then the conductor came and said, Ah, you are very good! You conduct this concert.” Gustavo was only twelve years old, but within five month he was given the assistant conductor post in Barquisimeto, and he led his own chamber orchestra a year later.

This is Gustavo Dudamel

Gustavo’s gift was quickly recognized, and by the age of 15 he stood on the podium of the Simón Bolívar Youth Orchestra of Venezuela, now the Simón Bolívar Symphony Orchestra of Venezuela. He took lessons with El Sistema founder and director José Antonio Abreu, and soon caught the attention of Claudio Abbado and Sir Simon Rattle. Dudamel was invited to study with the Berlin Philharmonic under Rattle, and he instantly impressed with his single-mindedness with which he pursued musical knowledge. “He wanted to learn, learn, learn, to try new things, implement them, rehearse, prepare well for the orchestra that he was working with,” a member of the Berlin Phil explained. “I have never encountered anybody who worked harder.” 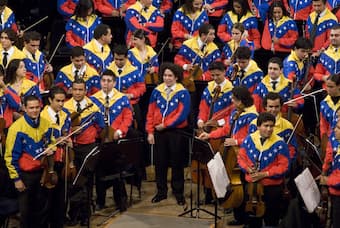 The Swedish contralto Anna Larsson tells a similar story. “I think it is one of the downsides to being considered to be a Wunderkind. People think that you can just come along and do it, that you don’t have to prepare. But it’s the opposite. I think every Wunderkind is like that because they’ve been working so hard. If you see what Mozart did as a child, working with his father on composing and performing; or Michael Jackson; or the Swedish tenor Jussi Björling; you’ll see they’ve been working like crazy from when they were babies. Gustavo has always worked hard, and he is one of the best-prepared conductors I’ve ever sung with.”

John Adams: “Must the Devil Have All the Good Tunes?” (Dudamel/Wang/LA Phil) (Excerpt) 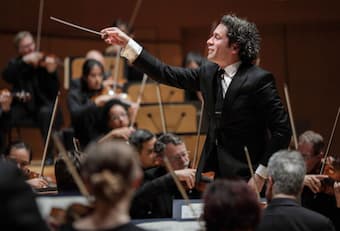 On and off the podium, Gustavo Dudamel is almost universally praised for his ability to communicate joy and a sense of collaboration. Emanuel Ax relates, “He is obviously an incredibly talented and astute musician, which is a rarity in itself. But then he’s also got something that just seems to make everybody happy. The ability to make things fun while at the same time taking them incredibly seriously is a talent that Gustavo has more than anybody else I’ve ever seen.” Bringing a sense of community to the orchestra, Dudamel is committed to always get better. “He demands that you soar, but makes it feel as if you’re part of the family… he communicates a pure love of the music.” For Gustavo, establishing a human connection is fundamental to the way he makes music. Making music is a process of mutual exchange, and Gustavo maintains, “when you start work on a piece, you have the inspiration of the music. But also, when you see the orchestra, they give you further inspiration. You can feel their emotion. In rehearsal, of course, you work on the details. But in the end, it’s not only my inspiration. It’s the inspiration of every single person in the orchestra.” Dudamel is able to bring out the best of the personality of each orchestra that he works with. “The players in the orchestra are able to express themselves, because they’re joining in, rather than being directed.” 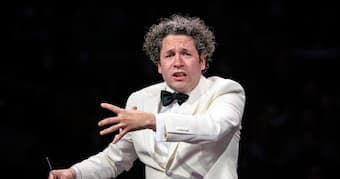 Gustavo Dudamel is driven by a vision of music as a social force. He strongly believes that “everyone in the world deserves access to the world of the symphony orchestra, and everyone can benefit from the encounter.” Striving to bring a social element to his works, Gustavo “encourages socially-motivated music projects, ensuring that young people from disadvantaged communities have access to his concerts.” He constantly takes the time, a critic explains, “to realize his vision of music as a means towards building a better world.” His success has inspired hundreds of new initiatives around the world, and even “after becoming a wonderful conductor, internationally in demand, the road always leads him back home.” “It’s amazing to see the places where El Sistema is happening right now,” Gustavo says. “We could never have dreamed of it. But then you see that it’s about something really important, something that has been missing. It’s something that can be utopic, and it runs counter to the pragmatic way that we tend to work. We are losing our sense of how to enjoy life. But when you are playing music, you are completely outside of the constraints time. And you are enjoying it. That’s beauty. Our children have the right to have access to beauty.” Dudamel strongly believes that art has to be far more central to the main sense of our society, and that we live in a word full of divisions. “But when we play, we are united. Music is a symbol of unity, and it’s only one world, in the end.”