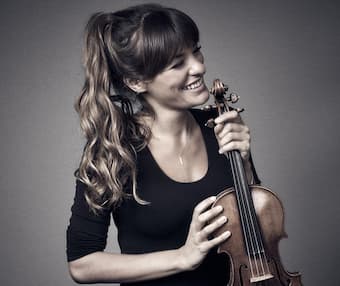 Nicola Benedetti, born on 20 July 1987, is widely considered one of the most sought-after violinists of her generation. According to critics, “her ability to captivate audiences with her innate musicianship and spirited presence, coupled with her wide appeal as a high-profile advocate for classical music, has made her one of the most influential classical artists of today.” Shooting to fame at the age of 16 by winning the BBC Young Musician of the Year in 2004, Benedetti has been tirelessly working on behalf of live performances. Determined to bring music to the masses despite the pandemic, Benedetti has voiced her frustrations with the way politicians have curtailed music and the arts. “This summer, sports began to allow massive audiences, while theatres and concert halls were hobbled by continued social distancing. It’s difficult when you see the football with 40,000 to 60,000 people gathering just in official numbers in official venues, never mind millions in the streets, and you look at musicians’ restrictions in that context.” Benedetti continues, “when you feel you’re making enormous sacrifices for the sake of your civic duty to other people, you want to know that everyone else is participating in that too. A lot of bad feeling comes when you’re doing your part, but the rest of society isn’t doing theirs. For people in the live performance industry, it’s difficult not to draw those comparisons and feel you’re being unfairly penalized.” 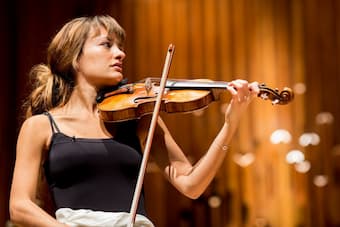 Benedetti was born in West Kilbride, North Ayrshire, Scotland to an Italian father and an Italian-Scottish mother. Taking lessons from Brenda Smith, she started to play the violin at the age of four, and at eight, she became the leader of the National Children’s Orchestra of Great Britain. In 1997, she entered the Yehudi Menuhin School in Stoke d’Abernon, Surrey, an educational institution that provides education and tuition for musically gifted children from all over the world. Studying with Baron Menuhin and Natasha Boyarskaya, Benedetti played solo in the school’s annual concert at Wigmore Hall and performed in London and Paris as a soloist in Bach’s Double Violin Concerto with Alina Ibragimova at the end of her first year. Appearances with a number of English and Scottish orchestras soon followed, and in August 2002 Benedetti won the UK’s “Brilliant Prodigy Competition.” Subsequently, she left the Menuhin School and began studying privately with Maciej Rakowski, the former leader of the English Chamber Orchestra. Crowing her early achievements, Benedetti won the BBC Young Musician of the Year competition in May 2004, performing Szymanowski’s First Violin Concerto in the final at the Usher Hall in Edinburgh, with the BBC Scottish Symphony Orchestra. 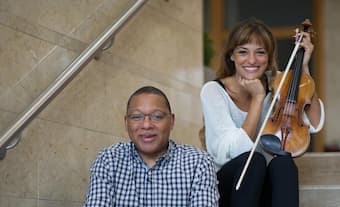 With concerto performances at the heart of her career, Benedetti played well over 100 concerts a year by the time she reached the age of 21. At that point, she decided to step back and refocus on how much she should be performing and what sort of repertoire she wanted to play. Performing with the most esteemed conductors in the most illustrious venues in the world, Benedetti became a champion in commissioning new works. This includes Mark Simpson’s critically acclaimed Violin Concerto, written for Nicola with the London Symphony Orchestra, and Wynton Marsalis’ Violin Concerto, which won a GRAMMY Award for “Best Classical Instrumental Solo” in 2020. She first met American jazz legend Wynton Marsalis during a performance at Lincoln Center at the age of 17. Marsalis was instantly impressed by Benedetti’s sound and skill, and they developed a lasting friendship not about instrumental performance, but around “common views about music’s power and how it lies within a grander context.” In conversations over the years, Benedetti encouraged Marsalis to explore his passion for the fiddle through composition. “I would always say to him, if you love the violin so much, why don’t you write something for it?” It took time, but Marsalis finally agreed, and he explained that his “inspiration for the piece was as much Benedetti as her instrument.” 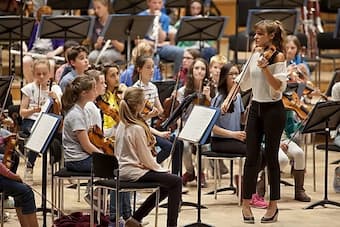 Benedetti is not just simply another star violinist. She is a dedicated, passionate ambassador and leader in music education. Her commitment to supporting the UK’s music practitioners was underlined in July 2018, when she took over as President of the European String Teachers’ Association. She continues to hold key positions in a number of the Country’s most established youth music organizations. And in 2019, Benedetti established “The Benedetti Foundation.” At its core, the Foundation “unites those who believe that music is integral to a great education and demonstrates ground-breaking teaching by producing and delivering innovative and creative musical experiences accessible to all.” Since its inception, the Foundation has worked with over 29,000 participants, age 2-92, from 103 countries through its transformative in-person workshops and online sessions for young people, students, teachers and adults. Concordantly, she formed the “Benedetti Baroque Orchestra,” which gathers freelance period-instrument players who collectively join together to create the highest level of collaborative and energized music making. For Benedetti, “Baroque is potentially the most joyous, welcoming, vivacious, open-armed music there is. This music was intended to be understood and easily communicable. It combines intensely high-quality musicianship and compositional skill with an absolute mission and a mantra of communication.”