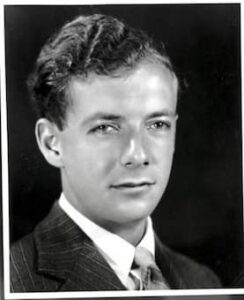 He is supposed to have told pianist Clifford Curzon in the 1940s that it was supposed to be a set of impressions ‘of a boy’s pre-war seaside holiday…,” which begs the question of which war? 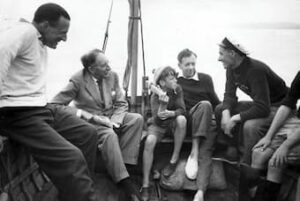 He was born in 1914 and World War I started a mere 9 months later, so the idea of it being pre-WWI has to be tossed, yet it was written in 1934, when there was no idea that there would be a World War II. It may be that Britten was really referring to a kind of golden-era Britain, that bright and shining time before WWI when England was still ruler of the world. At the same time, the work is really tied to a personal reality. 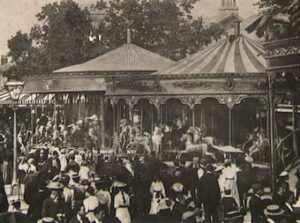 The first movement, Early Morning Bathe, starts with a literal toe-in-the water moment before the final plunge. Once in the water, our swimmer breasting the waves as he starts to warm up. Britten paints an audio scene that has been rarely matched. It ends with the swimmer shaking off the water (or shaking with the cold) – you get to be the judge!


Sailing takes us out to mess about in a small boat. The silence surrounds the small craft and we catch the sparkles of sun on the waves with the bright sounds in the right hand. The middle section is the place we’re all afraid of – the wind comes up and our little boat is tossed and turned. We have to pay attention and let the captain of the boat to get back safe and dry.


The joy of many a child’s summer was the Fun-Fair, with its swings and roundabouts. It’s a little toccata that’s all action – you can sense the excitement of the child at all the action around – what to do first? What to eat first? What to try first?


The day ends in Night. Everything is far away but with a twilight clarity. The ‘ghosts’ theme from the preceding movements float by as the child lies in stillness. The final movement unwinds the day. Night falls and the child falls asleep.


Holiday Diary is a view into Britten’s dreams – what the past could have been like if things were different. His sensitivity to his surroundings presented as if by a child with a simplicity and clarity that we can appreciate.