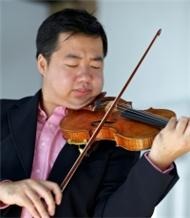 On this auspicious day, the 3rd day of the 3rd month of year 2013, my husband and I made a trip into the city ( Vancouver ) from our snowy mountain home ( Whistler ) specifically to attend a concert by violinist Ning Feng, in collaboration with pianist Weicong Zhang, presented by the Vancouver Recital Society. It was due to the enthusiastic recommendation of music connoisseurs like Andrea Fessler, a concert presenter herself, and Juliette Liu, a dedicated music patron, that we embarked on the trip with extremely high expectations. After all, these two have such exquisite taste and critical ears ( and eyes ), that Ning Feng cannot possibly be anything short of “awesome”!

We were duly rewarded. The recital was definitively worth every bit of the long drive. We couldn’t stop raving about him during and after the recital, and all the way journeying home : What an amazing talent, what a warm persona, what buttery tones, what formidable technical prowess! The last time I was equally enchanted, raptured and mesmerized by a string performer, was twenty years ago, when the Vancouver Recital Society presented cellist Jian Wang, another “Musician’s Musician”.

Today’s program was eclectic and fascinating :

The Beethoven sonata was executed with class and style. Both the violin and piano engaged in a graceful and civilized dialogue throughout, resonating and communicating. The Elgar sonata was not only boldly and expressively delivered, it was the most enthralling performance ( for me ) in the entire recital. I was reminded of Jacqueline du Pre’s magnificent rendition of the Elgar Cello Concerto in E minor, op. 85. The six Spanish pieces were delightful gems, espousing notions of love in pensive and melancholy mode. The aloofness of the Stravinsky Duo Concertante provided a most appropriate and desired relief from the overtly romantic qualities of the rest of the program. The duo concluded the concert by dazzling the audience with the ever popular Carmen Fantasie, bringing them to their feet. The two encores were electrifying : Massenet’s Meditation was a true display of Ning Feng’s emotional magic, with the genre of warmth reminiscent of David Oistrakh, and the Paganini demonstrated his skillful and powerful command of the instrument, just like Jascha Heifetz.

I have to mention how impressed I was with the professionalism of Weicong Zhang. She was responsive to every movement of Ning Feng’s violin bow, sensitive to every nuance he produced, and lent support to a wealth of sonorities. Always right there with him, she was the exemplary partner.

However, the highlight of the day, was the “question and answer” period after the concert. Totally unexpected, we were offered the privilege of actually interacting with the artists. The audience was interested in how Ning Feng managed to collaborate with Weicong Zhang when each lived halfway around the world. Ning Feng’s reply was that they already shared similar musical taste, and each practised his/her own part well, that all they needed to do was tweak ideas. Questions were asked about the age and history of his instrument, who the most significant persons in his musical development were, and how he managed to produce results when practice time was limited. He cited his four teachers as most influential, his father as most important ( he encouraged his violin studies, though only as a hobby ), and above all, Oistrakh and Heifetz as his inspirational “mentors”. Interestingly, he referred to Heifitz as one who was “not of this earth”, who belonged on a pedestal to be revered and worshipped. On the other hand, he regarded Oistrakh as a grandfather figure, one who was “always close”, “warm” and “human”. Very insightful comments indeed!

All in all, I came away an admirer of Ning Feng, not only of his talent, but also his humanity. He is thoughtful, personable, down to earth, with an impish sense of humour. Juliette and Andrea were right!