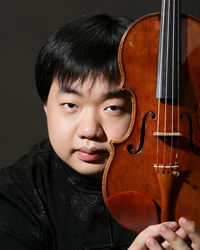 ‘It’s really an unsuccessful event, or a harsh word – failure – that makes people learn. To define ‘successful’ is difficult, but for me, it’s that no matter how hard you try, how high you’ve reached, there’ll always be somebody who’s better than you. So you cannot compare yourself with others. Otherwise you’d be so frustrated, you’d be depressed. So the only successful thing for me is that I make myself better than yesterday, and I make sure that tomorrow I’ll do better than today. There’s always space in front of you to improve, so don’t be bitten by rejections and failures, because that’s part of life.’

To say this is coming from a performer who, for the first time in history, achieved a perfect score of 100% in his final recital at the Royal Academy of Music, it’s extremely humbling. Winner of numerous awards, including the 2006 International Paganini Competition, Ning Feng boasts a busy recording and touring schedule, both at home and abroad, and finds a short gap in his hectic day to share his thoughts on both his own personal development, and the wider responsibility of musicians.

‘There are 2 different types of musician. One is really creating the music – the composer. And what we do with is something that’s already there. We’re only the interpreter. The first thing we have to be responsible for is the composer, because he’s actually made the music. Our duty is to serve the music, not the other way around. What we do is to serve it, and present it to the audience. This is our first priority.

‘Our second priority is for the audience. Concert performers exist only because of the audience. They’re paying their time to come and listen to your concert, so it’s a very serious thing! There are people spending their money to listen, so it’s a responsibility. I can’t decide which challenge is the greatest, but take the people coming to the concert, for example – they don’t know that you just arrived from 15 hours flight a few hours ago. It’s not an excuse, so it’s a big challenge.’

However, instead of setting specific, tangible goals for musical development, he looks at the bigger picture.

‘I have direction, but not goals. I believe that everybody has their own mission or destiny, they have their own fate, and you’re born to fulfil it, so I don’t decide what I’ll do in the future. All I can do is to decide to do what I do now as good as I could. That’s the only thing I can control. But my direction is that I continue to serve music, I continue to serve my audience, and hopefully I’ll do better. I’ll do my best to make sure that I will get better. That’s it.’ 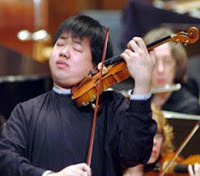 The view of his career as a directed, continuous process is a refreshing change from an often wide-held view that success only comes from winning competitions or passing exams – that every experience should be seen as an opportunity to improve.

To relieve the stresses and strains of such an involving job (both physically and emotionally), Ning Feng has a few hobbies that he enjoys (when he has the time!)…

‘I have to say, I’m an electronic gadget person. I follow the news every day – I don’t really collect gadgets, but like to be updated with the latest news, the latest information. I also like to cook, if I have time. Cooking is relaxing for me, and in some ways is very similar to music. Vibrato is like salt – every dish needs it – but then something like the glissando, that’s like pepper, or garlic, or sugar. Sometimes you use it to make things taste better, but when you use it in the wrong place – eugh!’

Despite the rigours of the job, especially the challenges it poses to one’s personal life – ‘It’s tough, being apart from your family but I suppose it’s the same for everybody’ – Ning Feng clearly loves what he does, and finishes with putting an interesting perspective on how personality is an important aspect of performance.

‘I feel extremely fortunate and lucky to have been offered the opportunities to play, to serve music and the audience. And while I’m doing it, I enjoy it. Your personality is in your blood. What you are, who you are will always be there. You see people in general: they’re not trying to express their personalities – they’re there naturally, from the way they present themselves. It’s the same with performing arts. We learn the technique of the instrument, but after that, all the techniques need to be forgotten. What is left at the end? Yourself. And the music.’