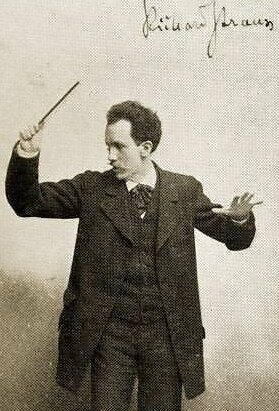 After grooming his conducting career under Hans von Bülow in Meiningen between October 1885 and April 1886, Richard Strauss was offered the post as third conductor at the Munich Hofoper. Before he took up his post in Munich, Strauss — on the recommendations of Johannes Brahms — spent several weeks touring Italy, describing various sites in a letter to his mother. In the margins he sketched tonal impressions to be used for his “first hesitant steps” into the realm of the tone poem. Strauss wrote to Bülow, “I have never really believed in inspiration through the beauty of Nature, but in the Roman ruins, I was set right, for ideas simply come flying to me. Perhaps it will interest you that on a drive on the Appian Way, one glorious afternoon, I suddenly caught myself unconsciously humming the D-major trio of the Scherzo of Beethoven’s Seventh Symphony, it expressed so completely the mood of this wonderful Campagna. I am now capable of composing works based on external inspiration.”

The work was first performed on 2 March 1887 at the Munich Odeon with Richard Strauss conducting. Initial reception was rather mixed, as Richard reported to his sweetheart Lotti Speyer. “Of course I found it all tremendous fun: “Eine Hetz” as they say in Vienna. Some of them applauded furiously, some of them hissed vigorously, in the end the applause won. The opposition has pronounced me half-crazy, talk about going astray and all that kind of rubbish. I felt immensely proud: the first work to have met with the opposition of the magnitude; that proves it must be of some significance.” Richard Strauss incorporated the tune of Funiculì, Funiculà into the fourth part of his symphonic poem. He assumed it was a traditional Italian folk song, when Luigi Denza in fact, wrote it in 1880. Denza filed a lawsuit against Strauss and rather predictably won.

Strauss managed to secure a number of important conducting engagements in Berlin, Dresden, and Leipzig and as an assistant to Cosima Wagner in Bayreuth. Eventually he secured an appointment as Kapellmeister to the Grand Duke of Saxe-Weimar-Eisenach. Strauss’s reputation was forever transformed from a promising young assistant Kapellmeister to Germany’s most avant-garde composer by the extraordinary premiere of Don Juan on 11 November 1889. Bryan Gilliam suggests that, “the work’s provocative subject matter and musical brilliance earned him an instant international recognition as a modernist. For Mozart, Don Giovanni was a perpetual seducer, a symbol of aristocracy whose indulgences know no bounds, yet he no longer takes pleasure in his conquests. Strauss, on the other hand, saw Don Juan as a romantic hero and adventurer hopelessly searching for the ideal woman.

Strauss’s engagement with tone poetry none withstanding, he also began to probe the relationship between text and music. By the late 1890’s, he had not only composed several hundred songs, but also completed a melodrama for narrator and piano. Enoch Arden, based on an 1864 poem by Alfred, Lord Tennyson consists of brief interludes and moments of punctuation and commentary. Although popular during its day, this kind of dramatic presentation with musical accompaniment, together with recitations and declamations quickly fell out of fashion.