In Tune Arts
Gabriel García Márquez and Music
by Maureen Buja May 14th, 2014 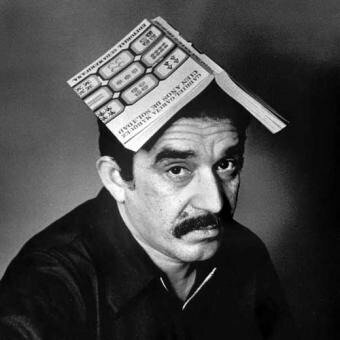 Nobel Prize–winner and Colombian author Gabriel García Márquez died recently and we were looking traces of him in the musical world. His books and stories brought the realism and magic realism of South American literature to the world. He also inspired music of all kinds, from ballet to opera, and from orchestral to chamber and solo music. The composers he inspired come from all over the world and it’s unusual to find a modern author who has touched so many composers and inspired them in so many different ways.

His 1975 novel El otoño del patriarca (Autumn of the Patriarch), about the fall of the Venezuelan dictator Marcos Pérez Jiménez, inspired a 2004 opera, Der Herbst des Patriarchen, by Italian composer Giorgio Battistelli to a libretto by Gotthart Kuppel.

Un señor muy viejo con unas alas enormes (A Very Old Man with Enormous Wings), a short story written very early in his career, has been made into both a ballet and an opera. Hans-Christian von Dadelsen and Babette Koblenz wrote the ballet Ikarus in 1989, setting it for a small electro-acoustic ensemble. In 2006, the same story was the basis for a short two-act opera by 22-year-old American composer Dylan Schneider.

A Very Old Man… was Schneider’s first opera and earned him the Edward Sandquist Prize in Music, given for excellence in composition. The composer notes this opera marked a very important creative turning point in his career.

Márquez’ 1994 novel Del amor y otros demonios (Of Love and Other Demons), was made into a two-act opera in 2008 by Hungarian composer Péter Eötvös to a libretto by the Hungarian author Kornél Hamvai.

Eötvös: Love and Other Demons

The work was a joint commission by the Glyndebourne Festival and the BBC; the staging was a co-production with the Lithuanian National Opera and Ballet Theatre. An unusual element in this opera is the role played by language: The different levels of narration and action in the story are sung in different tongues. English is the daily language of the noblemen, Latin is the church language, Spanish is the language of the doomed lovers, and the West African dialect Yoruba is the secret language of the slaves.

Also in 2008, composer Christopher J. Levin used part of the Of Love and Other Demons story for his orchestral work Of Love and Death in Forgotten Shadows.

Márquez’ novella Eréndira was used by Romanian composer Violeta Dinescu for one of her early operas.

A 1968 short story, El Ahogado más Hermoso del Mundo (The Handsomest Drowned Man in the World) inspired Cuban musician Juan Piñera to write a work for clarinet and piano in 2001.

A collection of 12 related short stories from the 1970s and 1980s, Doce cuentos peregrines (Strange Pilgrims), inspired Argentine guitarist Máximo Diego Pujol to write his own 12-part guitar work, Historias sin palabras (Stories without Words). The last story, about two newlyweds who come to grief on their honeymoon, was the basis for “Muerte en primavera.”

It’s remarkable to see how wide Márquez’ influence spread: our composers come from America and Romania, Germany and Italy, Cuba and Argentina, and is a strong testimony to the influence one author can have.