The art of the Norwegian painter Edvard Munch (1863-1944) was always conducted in the shadow of illness – both his own and hereditary mental illnesses that ran in his family. In his art, we find out hidden fears, the shadow thoughts that haunt us, and, in his most famous painting, The Scream, a response to ‘the enormous, infinite scream of nature’ that is always around us. 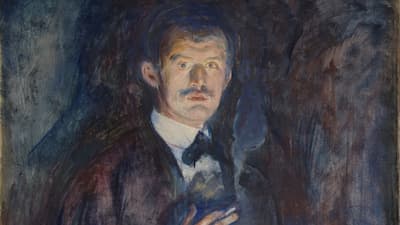 American composer Robert Jager (b. 1939) is known for his band and choral music, as well as his many works for wind ensemble. One work that’s only recently entered his repertoire is his 1996 Suite from ‘Edvard Munch’. 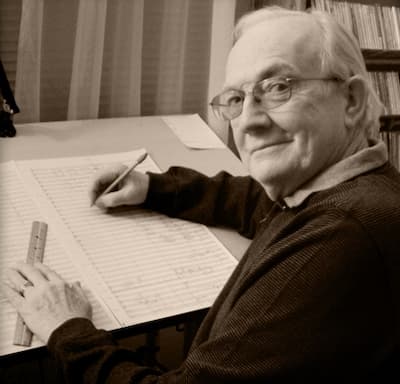 We wrote to the composer about this work and he said it was originally written for a 1967 documentary on Edvard Munch. He reassembled the work 20 years later as a suite.

It opens with Introduction and Nature Tableau. ‘Nature Tableau’ isn’t any one painting but refers to Munch’s habit of grouping similar paintings together to form a tableau. We can see this kind of grouping in this 1943 photograph of Munch in the house on his estate at Ekely, where he spent the last 20 years of his life.

From the first note of his Suite, Jager tells us that we will be in uncomfortable territory. The music is pensive and melancholy and also edgy. 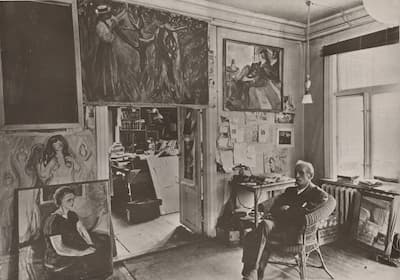 
The second movement takes us through one of Munch’s most haunting paintings, The Sick Child. Munch’s sister Sophie died of tuberculosis at age 15, when Edvard was 14. To create this painting, he used as a model a young girl who was the sister of one of his doctor-father’s patients. Munch painted many different versions of the subject over a period of 40 years, for the first time in 1885 and the last in 1925 when he was 62 years old. It is one of his most famous paintings and commentators speak about how the sensation of grief and pain that emerge from the painting are palpable. In Jager’s setting, we can hear how the child is fatally ill through the sense of isolation and melancholy conveyed through the music. 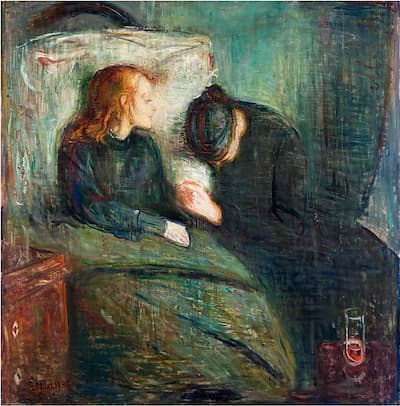 
The mid-point of the Suite is one of the most famous paintings of the modern era, which portrays a radical and fundamental expression of fear and of the pressure of the world with few equals. Even if the painting is silent, Jager gives voice to that scream of nature – the sharp sound of the violins contrast with the background noise of the percussion until we, as the audience, need to clap our hands over our ears with the artist. 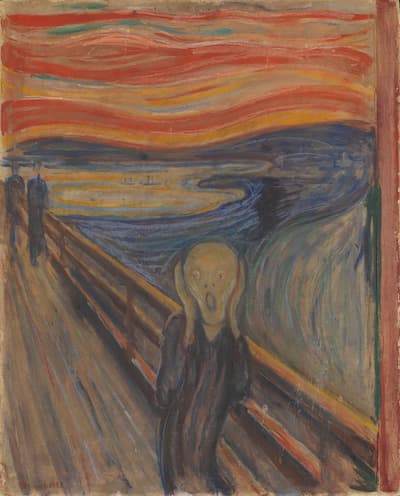 
The Kiss was created as part of his Frieze of Life, which depicted the stages of relationships between men and women. A common motif for Munch was the fusing of the couple’s faces into one unity. In Munch’s painting, the couple are crowded into the corner of a dark room full of dark hangings and the only light is that of the outside world, coming in through the window. This is an obsessive affair, not one of light but of possession. In Jager’s music, we tetter on the edge of love and being consumed by the other. 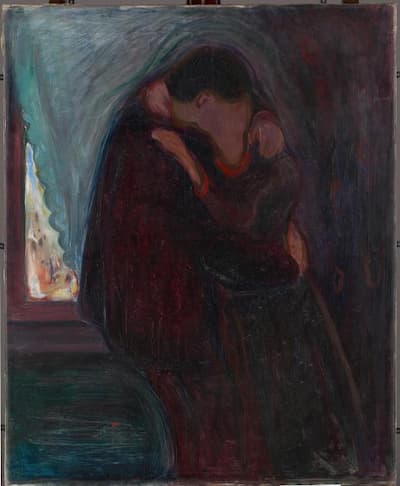 
In the final painting, also part of the Frieze of Life series, we have a representation of relationships from the single young girl in white on the left, through the courting couple, the married couple with the woman in a red dress, the older couple, and the widow in black on the right. As an illustration of a metaphor, any number of interpretations can be read into it. The woman on the left and right seem to be images of Tulla Larsen, a woman Munch had an affair in 1899 before rejecting her in 1900. Munch himself may be the man in the center. Yet, as a painting of a progression, it’s distorted, the beautiful young girl with red hair becomes a grotesque woman in the middle with overly dyed red hair whose corresponding red dress seems to engulf her companion. On the far right, the woman is alone, hair cut short, where all she has now is herself, but without her former bright future. Time has distorted everyone and everything. The same is given in Jager’s music. 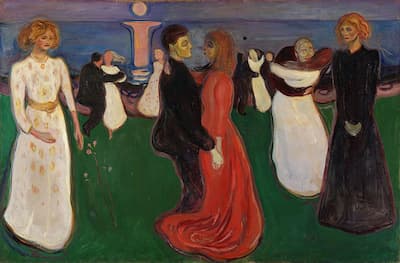 
What we are left with at the end is the sun, which casts a pale shadow in Dance of Life but was more gloriously represented in Munch’s mural done for Oslo University’s assembly hall. 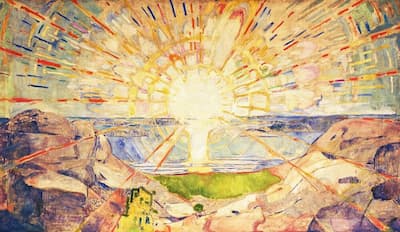