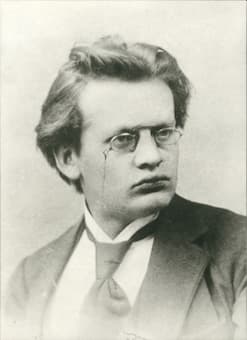 Known more for his abstract works, Max Reger decided to take, as he described it, ‘an excursion in the realm of program music’ in 1913 when he created his 4 Tondichtungen nach Arnold Böcklin (4 Tone Poems after Arnold Böcklin). The work takes four images by the Swiss symbolist painter Arnold Böcklin (1827-1901) as the inspiration for a set of tone poems, each with a different character. 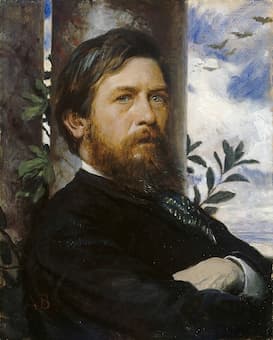 The work opens with a tone poem for solo violin with orchestra. Der geigende Eremit (The Hermit Fiddler), based on Der Einsiedler (The Hermit), painted by Böcklin in Florence in 1884. In the solo violin, the musical line is discursive, almost like an operatic recitative, placed above two string groups, one with muted and the other with unmuted strings, and the rest of the orchestra. The overall effect is, as Böcklin’s painting shows, a solitary player dedicating himself to his thoughts while around him, the world carries on and watches him. The painting is striking for its imagery of the putti watching in fascination while the hermit fiddler is concentrating solely on his music and his thoughts. 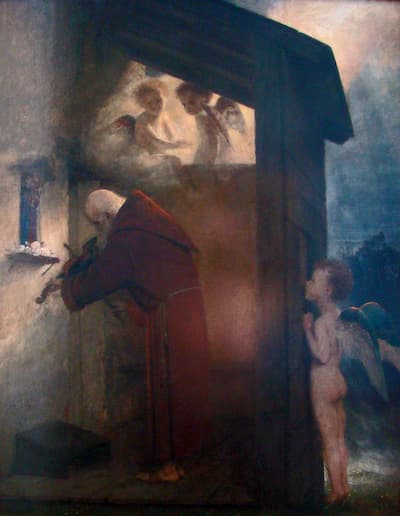 A complete change of mood comes with the second movement, Im Spiel der Wellen (In the Play of the Waves). Reger gives us the shimmer of the sea at night shown by Böcklin, and just as in Böcklin’s painting, there’s a touch of tension. The naiad in the front looks a bit less than enthusiastic than her companion triton. There’s a kind of forced jollity in the picture that also come out in the music. 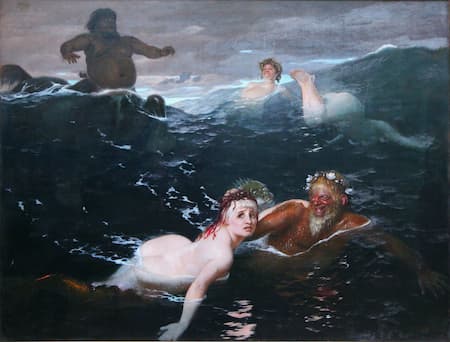 In his third movement, Reger takes up one of Böcklin’s most famous images, Die Toteninsel (The Isle of the Dead). 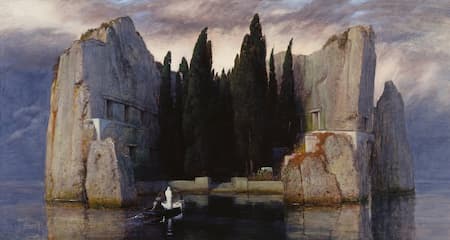 Böcklin painted five versions of this between 1880 and 1886. Many composers, including Rachmaninoff, took up this painting as a subject for their tone poems. Reger’s music for the painting is slow and demonstrative, with a rolled timpani for emphasis. Many of the melodic lines are descending, leading us into darker and darker sounds. It concludes, though, with a brief bright redemptive sound before the stillness of the final chords.


With the final movement, we emerge back into light, dancing sound. Based on the painting Bacchantenfest from around 1856, Reger gives us a party in sound. Notes poke out and disappear, the strings shimmer, and the overall feeling is festive and happy. This pure Dionysian high spirits (listen to that triangle part) and speeds onward to the end. 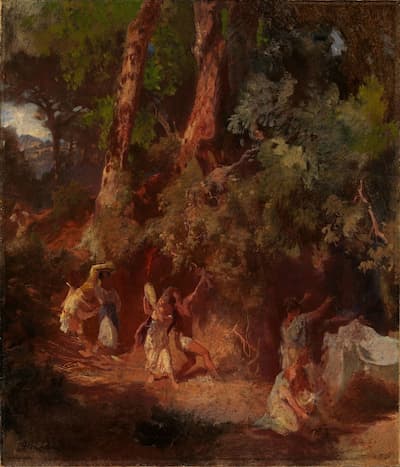 
The work can be played as individual movements, each a symphonic poem unto itself, or with all four movements as a kind of pseudo-symphony. Death, an unusual topic for a symphony, speaks more to the centrality of Death in the works of both Böcklin and Reger. This morbidity is countered by the shifts between pathos and irony where the humour that each artist seemed to place in his work. Look, for example, at the second movement, where what should be a happy carousing occasion in the waves has visual and audible representations of trepidation. The end of the work, too, carries the Bacchanal beyond the happy drinker to the happy drunk.