British artist Francis Bacon (1909-1992) was a figurative painter in terms of starting with a figure. Where he took that figure, into often unsettling portraits, made him one of the giants of contemporary British art. 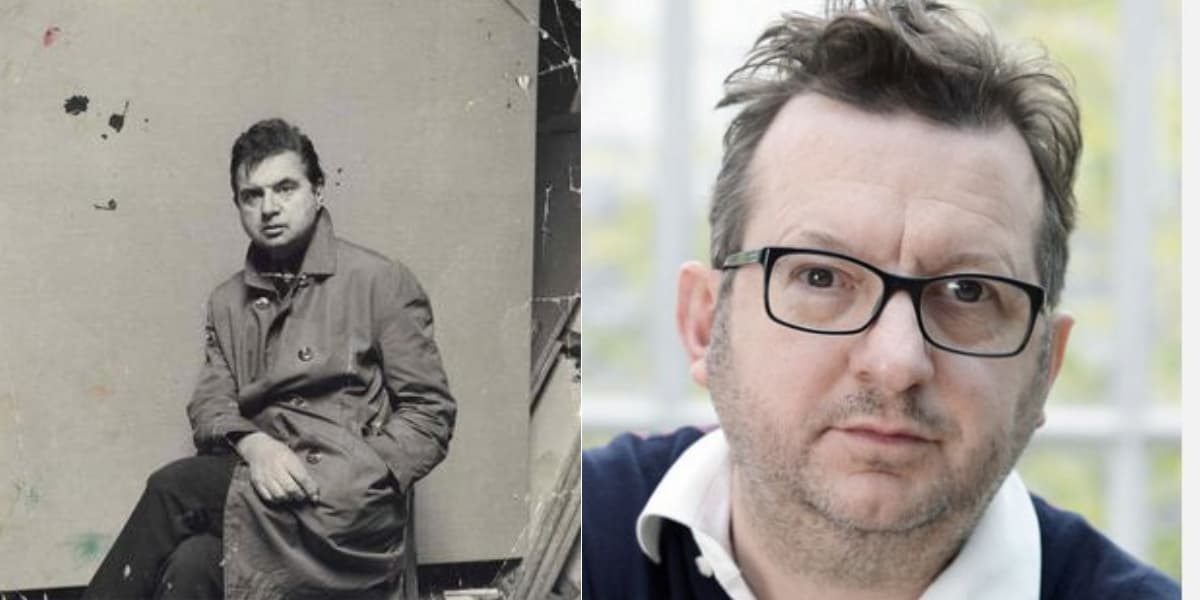 Throughout his career, he would focus on a single subject for extended periods, which might be thought of as extended sequences or variations on a single theme. In the 1950s, these were the screaming popes.

In the 1950s, Bacon tended towards abstract figures placed in geometrical or cage-like spaces. For his screaming popes, Bacon began with Velázquez’ portrait of Pope Innocent X. 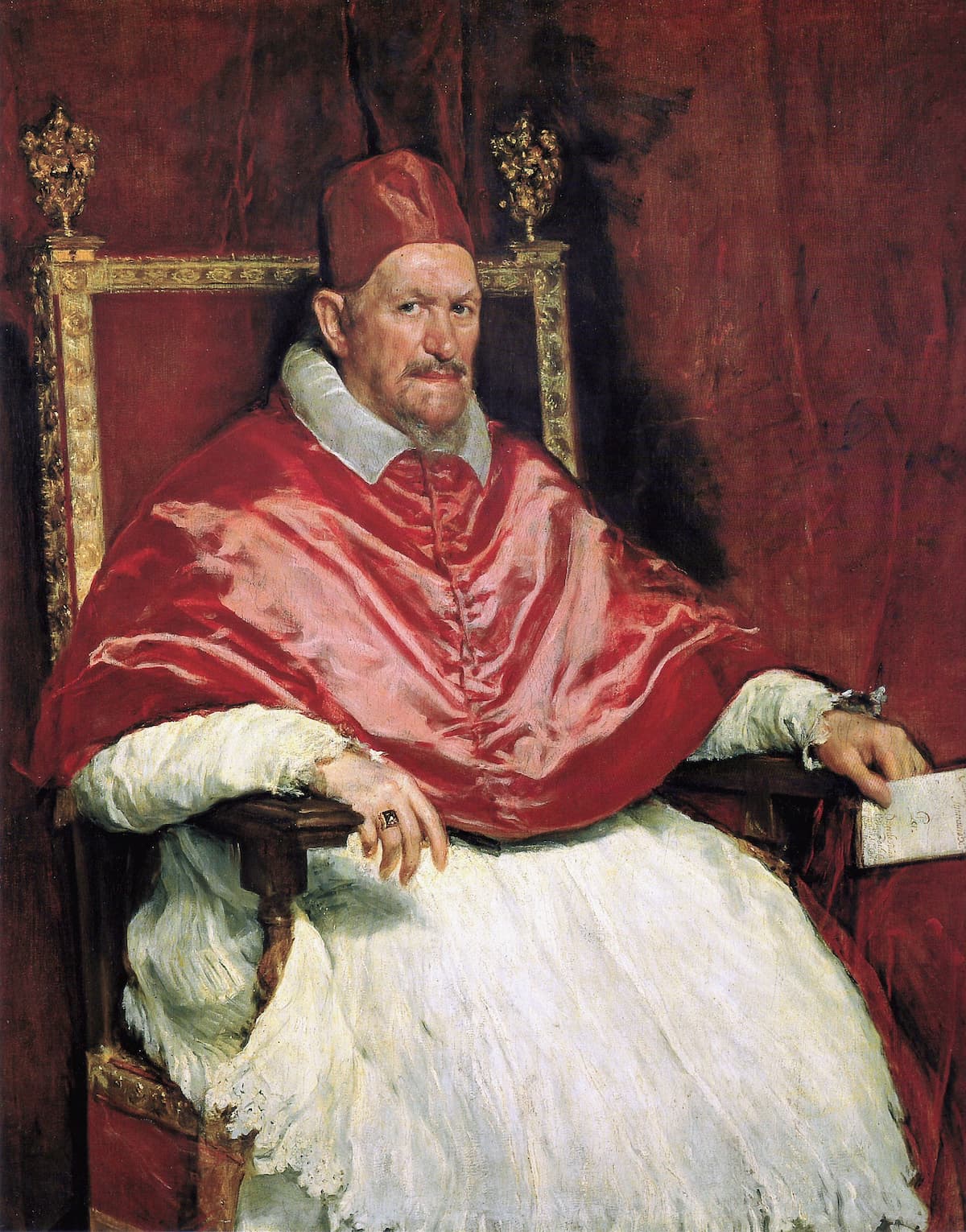 The pope, dressed in linens and rich red vestments, looks out at the viewer: intelligent, shrewd, but aging. The pope had been wary of sitting for Velázquez but was persuaded by seeing some of his other portraits. Many other people in the pope’s inner circle had been painted by Velázquez and the pope was persuaded to sit for the artist. Upon seeing it, the pope is said to have exclaimed ‘È troppo vero! È troppo vero!’ (‘It’s too true! It’s too true!’), and then did not let the picture out of the family. It remains to this day in the family’s gallery (Doria Pamphilij) in Rome. Painted in 1650, the painting wasn’t seen by the public until sometime in the 18th century. Those who were permitted to see it considered it not only Velázquez’ finest work but also one of the fine portraits ever made, capturing a vital man at the beginning of the descent of his powers.

In the 1950s and into the 1960s, Francis Bacon painted some 45 versions of the Velázquez work, known collectively as the screaming popes. One of the first is held in the Des Moines Art Center. 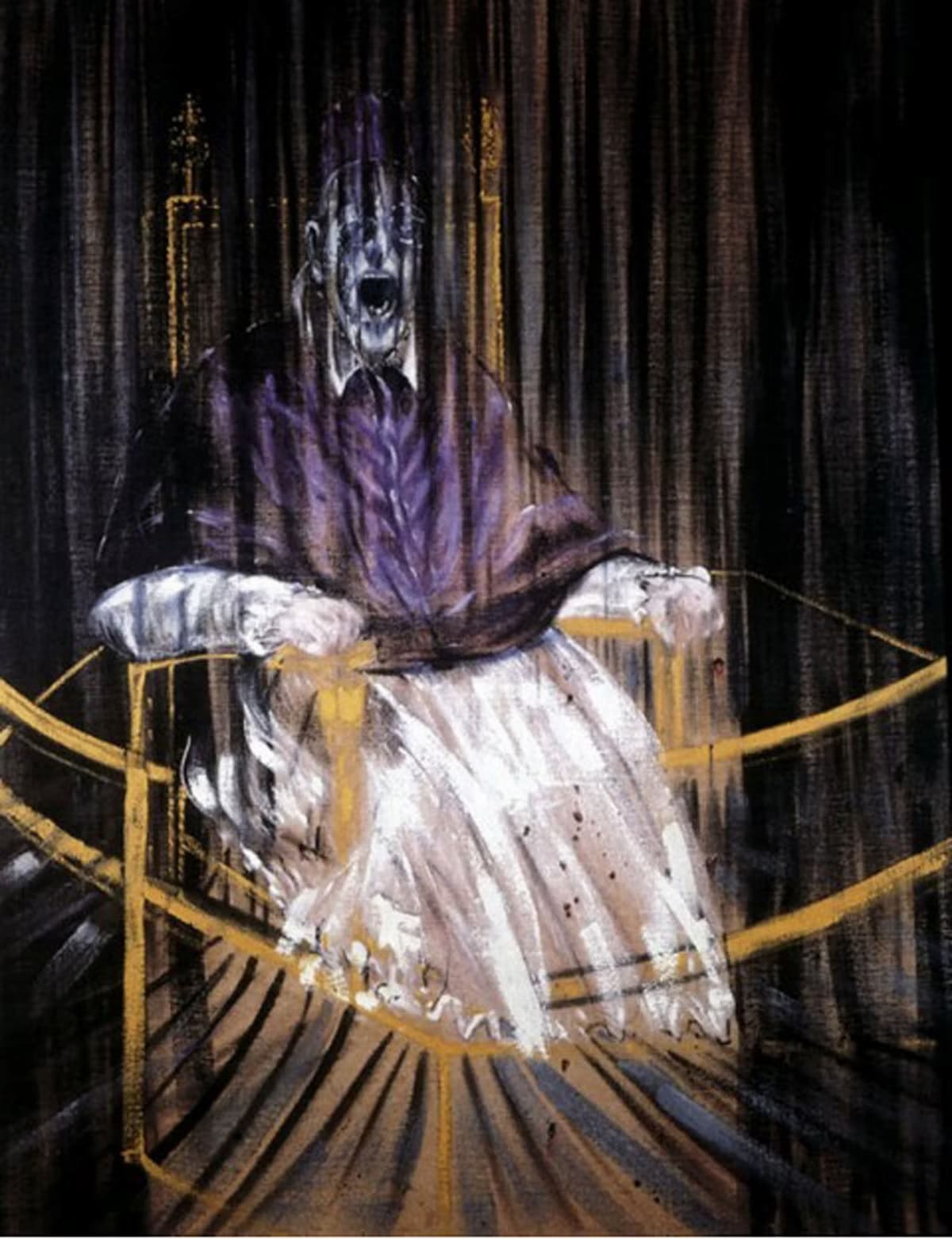 In this 1953 painting, we see a new style Bacon had adopted: darker colours, with his previous blues replaced by velvety purples. The pleated curtains at the back of Velázquez’ painting are now made to come forward and encircle the seated figure, becoming translucent. The prison of his chair is augmented by golden ropes that seem to be defining a glass cage. Unlike the original, where the subject’s eyes create the feeling of his authority and intelligence, here, the eyes are nearly invisible, replaced in focus by the screaming mouth. The hands are clenched and seem to grip the chair’s armrests whereas in the original the hands are relaxed, with one holding a letter.

Other popes that Bacon painted might place the focus on the face, showing it as a screaming mask, or if depicting the full figures, on variations on gesture or posture. In this 1961 version, painted as part of a series Study for a Pope, I-VI, the background has been replaced with a completely black background, the linen dress has been lengthened, and yet it’s the eyes that remain watchful and intent. 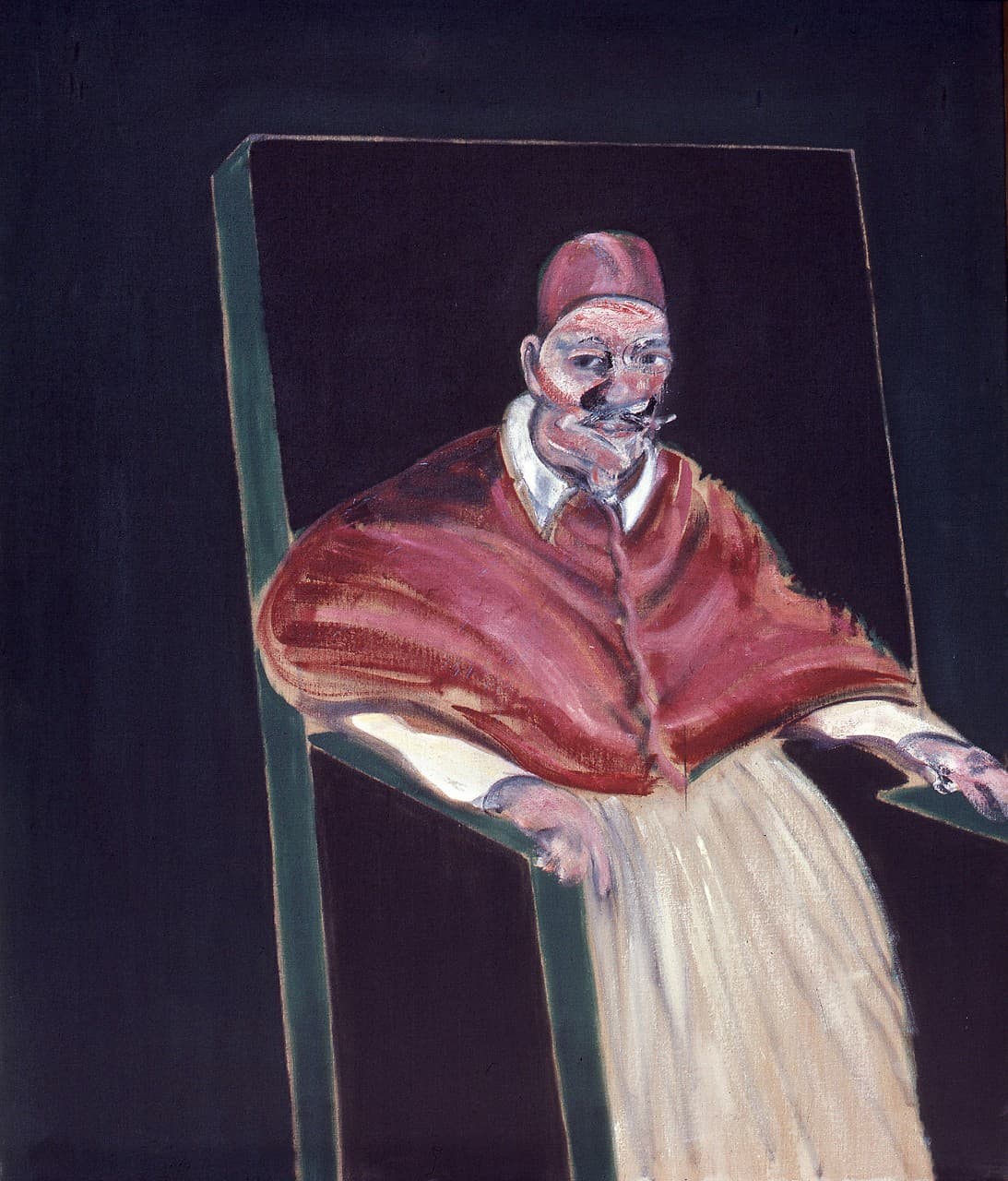 The English composer Mark-Anthony Turnage (b. 1960) saw an exhibition of the works of Francis Bacon at the Tate Gallery in London, he was struck by a group of three Pope paintings. His initial idea was to write a set of distorted Spanish dances – distorted in the same kind of way that Bacon had distorted Velázquez’ work. But, he said, ‘In the process of writing the piece, the dances (like a first layer of paint, or an outline) became so submerged in the other textures of the piece that only a faint trace is visible – just a hint of a tango here and there’. Turnage wants to highlight the ‘colouristic intensity and emotional immediacy of the paintings’ and then there’s the scream.