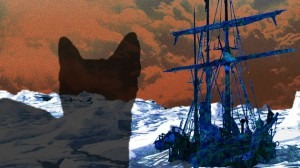 English Touring Opera maintains an reputation not only for high-quality productions both of core and rarely performed repertoire, but also for a wide-ranging education programme. That programme includes collaborative work with dementia sufferers (see Interlude’s previous feature on this Turtle Song project), many school workshops and celebrated operas for children; Laika the Spacedog was awarded two awards for Best Production at the 2013 Armel Opera Festival in Hungary. Their latest work is Shackleton’s Cat, which tells the story of Sir Ernest Shackleton’s famous ill-fated Antarctic voyage in 1914-17. The opera is already mid-run in London, but is soon to embark on a tour across the UK. I spoke to ETO’s Head of Education Tim Yealland, who wrote this and all of ETO’s childrens’ operas in collaboration with composer Russell Hepplewhite, and began by asking him why he chose this story. 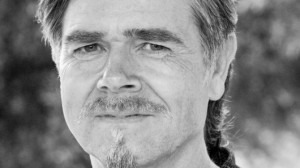 ‘It’s one of the greatest escape stories ever’, he replied. ‘Six men on a tiny boat in the South Atlantic seas managed to navigate 800 miles from one small island to South Georgia, and then head back to rescue all the other guys who had been stuck on the ice for 18 months! It’s a story of escape and adventure and daring, and an amazing feat of endurance. When I first heard about it, it sounded interesting, but hard to make into an opera – it’s difficult to write an hour-long opera out of a story that lasts a year and half! So I decided to centre the opera around Mr Chippy, the cat on Shackleton’s ship Endurance. That gives the story some different narratives, otherwise it would all just be one escape after another – a bit boring, perhaps.’

Yealland’s operas don’t just consist of singers on a stage – they’re highly interactive, with Shackleton’s Cat including maps and images from the expedition, cat-based puppetry, and interactive music. I asked him how making them was different from creating more mainstream work. ‘The process of writing this sort of opera is the same as writing any other’, Yealland explained. ‘But we also like the operas to be interactive. So, for example, we send out songs in advance to the children who will see the show, and we link our operas’ subject matter to what’s on linked school curriculums. We also have to think about getting a whole opera in the back of a van and setting it up, performing it and taking it down in a morning!’ 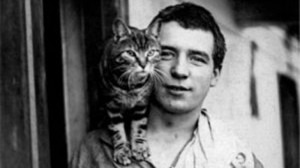 Some may spurn the need for operas especially for children – after all, why just not take them to see a ‘grown-up’ show? Yealland has strong feelings about this. ‘When I started this work, I had some difficult experiences doing that – the children were simply bored. I feel passionate about opera being a great art form for children, but you have to make it appropriate for them. And by far the best way of doing that is creating new pieces that intrigue them in all kinds of ways, with lots going on visually, musically, dramatically, with really interesting characters and very fast scenes – Shackleton’s Cat, for example, has twenty scenes in one hour, with quite major scene changes too. You have to work incredibly hard to engage a young audience.’

Refreshingly, Yealland actively doesn’t think about keeping this new audience captive as they grow into adults ‘The only thing you can do is provoke them’, he says. ‘If they see something they think is fun, they will go and investigate it further.’ There’s also an infrastructural issue. ‘Because we take these shows to about 10,000 children around the country, in schools who we go back to every year, we haven’t got the resources to provide them with more opportunities or make more contact.’ Nevertheless, there is a great range to Yealland’s work – as well as work with primary and secondary schools, he has also recently created a new opera for children with special needs, Waxwings. 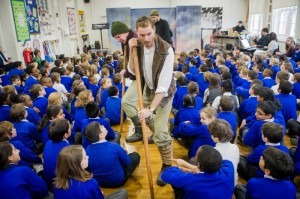 I asked Yealland to suggest how important this sort of work is to an opera company. ‘It’s essential, and fortunately, funding bodies think the same. Other opera companies do it in different ways, but we’ve developed a certain way of doing things at ETO because we’re a touring company, so we have relationships with particular areas. We love doing community operas – that’s the most fun thing you can do, getting people to create their own opera. The big thing for us is that all these creative processes are honest and genuine.’

Though Yealland is too modest to say so outright, it does seem that ETO’s ability to enable people of all ages in communities across the country to create their own work does set them apart from other organisations. Shackleton’s Cat is another exciting chapter in their work – do see it if you can.

Shackleton’s Cat begins its tour of the UK on March 17th. Visit www.englishtouringopera.org.uk for more details.