In Tune Society
Music to Save Your Life
An Interview with Jeanne Kelly of Encore Chorale
by Maureen Buja June 2nd, 2019 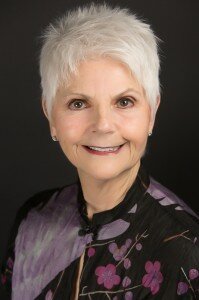 In America, we tend to think of music as something done by children, or professionals, or, perhaps done by adults who are still channeling their inner child (a nod to Mr. Jagger, now hitting a youthful 75). In other countries, such as Finland, choirs are an active way of life – a Finnish city with a mere 125,000 people can have over 50 choirs, and some of those choirs are for older adults only.

A ground-breaking study by Dr. Gene Cohen in the early 2000s looked at the impact of professionally conducted community-based cultural programs on the physical health, mental health, and social activities of those aged 65 and older. Half the group joined a choir and the other half did what they usually did. The group that joined the choir reported ‘a higher overall rating of physical health, fewer doctor visits, less medication use, fewer instances of falls, and fewer other health problems than the comparison group.’ They also had better morale, were less lonely, and were more active in general.

In 2001, Jeanne Kelly, who had worked with the sample choir, took this idea forward and created Encore Chorales, where the only prerequisite was that you be at least 55 years old. No experience necessary. No audition. Just come.

In the Washington DC area, there are now 15 Encore Chorales. There are also Encore Chorales in New York City, Chicago, California, and Pennsylvania. The Encore Chorales, with a motto of ‘Sing to Life,’ started initially with a repertoire of opera and oratorio choruses, art song, American songbook, and Broadway. But, in looking at the age of the choir, she saw that these were singers who had the Beatles in their ear as children. This prompted Ms. Kelly to set up the Encore ROCKS choruses in 2015, where the repertoire isn’t necessary by dead composers, and now there are 6 of the Encore ROCKS choruses in the DC area and another in New York.

In September, Ms. Kelly will be targeting the over 55s with memory impairment, including those with early or moderate Alzheimer’s. The repertoire will be based on music that the choir members in the Sentimental Journey Choir knows, starting with holiday music such as ‘White Christmas’ and ‘Silver Bells,’ to be performed at holiday concerts in December 2019.

In the summer, there’s Summer Camp! Two weeks of rehearsal away from the daily worries and with music at the core.

Encore Chorales are mostly self-funded, with each singer paying a minimal tuition of US$175 for each 15-week session. That covers music, conductor, practice room, and a rehearsal CD for practice at home. With one exception, all choirs meet during the day, so that problems with rush-hour traffic and the aged driver are avoided. Tuition covers about 75% of expenses and any further expenses, such as for tours, a recent performance on the Queen Mary II, and the summer camps, are met by sponsors, grants, or the singers themselves. For many of the singers, Encore Chorales are a lifeline, taking them away from silent watching of television (or their smart phones) and putting them in a social situation where they have to meet and talk to people, memorize music, and get back out in the world. Ms. Kelly noted that new relationships were often formed by people who were widows or widowers and that more than one marriage had been arranged among the singers.

The Chorales meet for 15 weeks, preparing their repertoire and then give 15 free concerts at the end. They meet from September to December and then from January to May. Their concerts are held in large churches, concert halls, and at the Kennedy Center in Washington. In 2018, they had grown large enough that they moved from a smaller hall to the Center’s Concert Hall. The hall seats nearly 2,500. Ms. Kelly mentioned that their concerts are always full – we can’t say ‘sold out’ because the concerts are free.

In the DC area, the 15 Chorales all practice the same repertoire for each 15-week cycle. This means that for a cycle’s 15 closing concerts, it’s possible to put as many as 550 singers on a stage.

In June 2019, the Encore Chorale will be on their UK tour, starting on 1 June with a concert in Bath. The repertoire will include ‘Hallelujah, Amen,’ the closing number from Handel’s Judas Maccabaeus; Sarah Quartel’s ‘Sing, My Child’; and the European premiere of Julian Wachner’s An Alleluia Flourish, which was commissioned by Encore Chorales and which had its premiere last December at the Kennedy Center in Washington. They will be performing with the Soul Sanctuary Choir in London, each with their own repertoire, but will come together for a joint performance.

When you see the video, you’ll see that some singers are standing and others are seated, as their health permits. You’ll also note that although they may hold their music, few consult it, keeping their eyes firmly on the conductor. This is part of their training – watch the conductor and not the music and, at the same time, improve your mental strength and agility.

Think of how music can save your life – and see how these singers are putting that into practice.