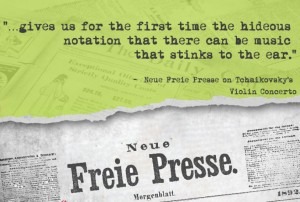 I’ve been reviewing classical music concerts in London for my blog and for an international concert and opera listings site for over five years now. In many ways, it’s the ideal job for me as it combines my twin passions of live classical music and writing about music, but I do sometimes query the usefulness or purpose of reviews and the role of music critics and reviewers.

There was a time, not so long ago and certainly within my living memory, when “professional” critics were regarded as important arbiters of taste and cultural awareness, and who could, seemingly, make or break a career with one well-aimed pen stroke. Many of these people wrote for major broadsheet newspapers and respected music journals and magazines. Their views were regarded as intelligent, considered and definitive: indeed, some people regarded their commentaries as the last word in music criticism.

But critics are not gods, and these days, with the rise of online reviews and blogging, music criticism has become far more democratic. Many online reviewers and bloggers are not professional journalists (by which I mean people who get paid to write), but many are musicians or academics: intelligent writers with a depth and range of knowledge that may be superior to that of broadsheet music critics. And because they have not been commissioned to write by a publication (print or online), they take a different approach, often producing responsible, fair-minded and intelligent responses to the music they have heard.

In general, I feel concert reviews should serve the following purposes:

• Provide a record of what happened, when and by which musicians

• Give the reader a flavour of what is was like to “be there”.

• Place the concert in some historical and musical context (for example, a composer or other anniversary, a premiere of a new work, etc)

Good reviews don’t make personal comments on the performer, nor allow the writer’s personal taste to rule the review. Good reviews offer the writer’s considered opinion of the concert: was it effective and did it work? Which parts stood out, which did not? Above all, reviews should not seek to tell the public how to listen – nor instruct the musician in his or her art. When I review a concert, I expect to enjoy it and hope that the performer will play with conviction and commitment. Intelligent listening will always reveal flaws as well as highlights, and it is dishonest to mispresent the experience, but there are ways of phrasing this which ensure the review is lively, readable and fair.

There have been occasions when musicians have taken issue with critics – most recently Dejan Lazic’s disagreement with The Washington Post and Khatia Buniatishviilli’s riposte to a negative review in The Guardian – which have created lively debates amongst critics, musicians, the listening public and readers of reviews as to whether musicians should respond to negative criticsm. Some artists simply don’t bother to read reviews, and some have agents, managers, mentors and partners who filter the reviews. Performers should have the courage of their convictions, to get up on stage day in day out and give concerts without worrying unduly what reviewers and critics are going to say. An international artist will play many concerts in many cities across the world and be heard by many hundreds of people, a fraction of whom are critics and reviewers. A single concert is just a day in the life, and a single negative review is unlikely to ruin a career.

But some musicians do set great store by reviews: a favourable write up can offer a significant boost, both in terms of career development and more commercial considerations. A review is an endorsement, a testimonial and a confirmation of the musician’s craft and art, and a review from a leading critic or respected music blogger can be very helpful indeed. Always take it as a compliment if a reviewer writes about you, consider the views expressed and accept or reject them as you see fit.

Listening to music is a highly subjective experience, even for the most experienced and knowledgeable critic. But reviews should seek to be objective: I may not like the piano music of Schumann that much, for example, but I can appreciate when I hear it played well. Not being arrogant or egocentric is as important in the field of music journalism and criticism as it is in the world of the performing artist. As the acclaimed British pianist Peter Donohoe said in his own article about music criticism, ultimately musicians and music critics should be “all on the same side” – that of the music.

For my own part, I love attending concerts and I enjoy sharing my pleasure and passion for classical music via my writing, either in reviews or more general articles. It is challenging to write about classical music in a way that is non-specialist, accessible and interesting, and the greatest compliment I have been paid by readers on several occasions is “your review made me feel I was at the concert with you”.