Blog
The Music is the Least of It
by Maureen Buja December 21st, 2015 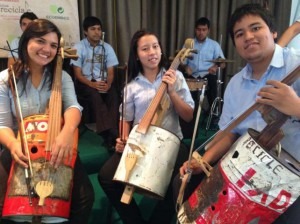 The remarkable Orquesta de Instrumentos Reciclados de Cateura [Recycled Orchestra of Cateura] is a project from a village next to the Cateura landfill outside the city of Asunción, Paraguay, and is the subject of a new documentary entitled Landfillharmonic.

Beginning with an idea for a documentary on underserved children in Paraguay in 2009, producers Alejandra Amarilla and Juliana Penaranda-Loftus were guided by the Paraguay Ministry of Education to the Cateura programme and made a short documentary that came out in 2012.

Three million views later, the Orchestra came to the attention of international television and became a hit.

The orchestra was begun by environmental technician Favio Chávez, who had originally come to the landfill to supervise a new recycling project. Using his own musical knowledge as a basis, he began to give free music lessons and soon attracted a wide group of students. He had students but lacked more than a few basic instruments. One of the pickers in the landfill, Nicolas ‘Colá Gomez, became the orchestra’s luthier, creating new instruments from detritus from the landfill: violin bodies from oil cans, cellos from oil drums, saxophone keys from spoons and buttons, tuning pegs from high-heel shoes. 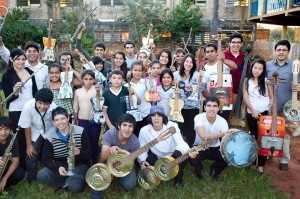 And now, one Kickstarter campaign later, we have a documentary. Directors Brad Allgood and Graham Townsley took a long-term and in-depth look at the orchestra, its beginnings, and where it has ended up on the global stage. Allgood and Townsley’s documentary, Landfillharmonic, traces the history of the orchestra and its surprising international success. One orchestra member, following her father’s love of heavy metal music, wrote to the group Megadeth on Facebook. This led to the fledgling orchestra becoming part of Megadeth’s stage program, performing Symphony of Destruction in Detroit and then on the group’s Chile tour. After listening to the beginning of the rehearsals for the piece, to see them on stage in rehearsal with Megadeth and being warned by Dave Mustaine that it might be louder than they were used to, was a mastery of understatement.

The documentary is a wonderful exposition of the way that music can change the life of its practitioners. Far from being condemned to a life of poverty, the players now have the ability to dream and to see those dreams come to fruition.

However, this is not a documentary about music. The instruments sound terrible, are often out-of-tune, and you do not get the impression at all through the film that it’s music’s oft-cited power that’s driving these players forward. In the live concert by the Orchestra that I saw before the film, the pieces were simple, but in every case, the players’ gaze was riveted to their music. In the announcements from the stage, no piece of music was given a title and no composers were named. One piece, in fact, was recognized by one audience member as being a fairly modern protest song from Peru about the conditions in the copper mines but from the stage it was announced only as ‘Latin American.’ Their sole ‘classical’ work, Pachelbel’s Canon, came with a surprising rock beat from the drum set. The music the Orchestra plays will be the vehicle to get these performers out of the ghetto, but it’s not going to be their key to a career as musicians. 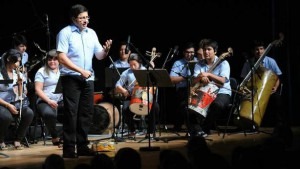 Obviously, every part of an instrument cannot be trash-sourced: you still need to have real strings, you still need real bows, the winds need real key systems and real mouthpieces, the drum set has Zildjian cymbals, and nothing in the film explains how these important elements came into the hands of the orchestra. In fact, in common with most films on musical subjects, nothing here looks at the money: how does the orchestra afford to do what they do? How much did they get for their association with Megadeth’s South American tour? What remuneration did they get from their various international television events? How can the director afford give up his day job in environment and work solely on orchestra and music school matters? These topics are never addressed and the focus is moved instead towards how much can be reclaimed through recycling (the Cateura landfill received 1.5 tons of garbage a day), and how much the conductor, Favio Chávez, has made possible through his vision of music education. Clearly the students benefit, but what comes next? Several players spoke of their dream to become music teachers or orchestral players, and it will be interesting to see if this is, indeed, the next step.