In Tune Arts
Music, Art and Nature
by Ursula Rehn Wolfman May 14th, 2016 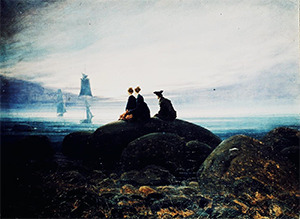 Over the course of the last two centuries, there has been an interesting, changing relationship between music and the other arts, and concepts and depictions of nature.

During the Classical period nature was represented as a backdrop in paintings for classical myths, as in The Arcadian Shepherds and Landscape with the Funeral of Phocion by the French artist, Nicolas Poussin . The late 18th century saw a change from the Classical to the Romantic era. In literature, Jean Jacques Rousseau’s 1782 work, Les Rêveries du Promeneur Solitaire [The Musings of a Solitary Wanderer], shows nature in a very different light. Nature now becomes central to human experience — in his Fifth Promenade, Rousseau talks about finding solace in nature, in seclusion, far from society which corrupts — nature starts to reflect human emotions. Caspar David Friedrich’s work, foreshadowing the German Romantic period of the 19th century, shows us in his Moonrise above the Sea (1822) a ‘mood’ painting, ghostly ships passing under the moonlit sea, the back of spectators in the painting turned toward us — they, like us, thus become participants through contemplation and experience of the depicted scene – of nature. 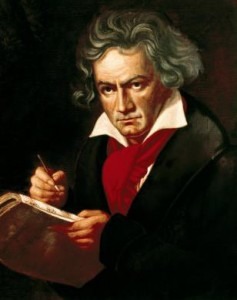 In music, Ludwig Van Beethoven’s Moonlight Sonata, his Piano Sonata, The Tempest, as well as his Symphony No. 6 in F-Major Pastoral, op. 68 come to mind. In his notebook of 1803 Beethoven speaks about finding “refuge in the midst of nature” and taking note of the trills of birds, the rustle of leaves, the trickling of water, about which, he notes, “the greater the river, the more grave the tone”. 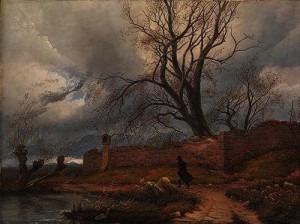 Just like Rousseau, Beethoven tried to capture feeling and sensitivity in the heart of nature, as during his lengthy walks in the countryside near Vienna, and to express it in his music. The inscription on the cover of its first edition reads Pastorale – Sinfonie oder Erinnerung an das Landleben (“Mehr Ausdruck der Empfindung als Malerey” [Pastoral Symphony or Remembrance of the Country Life](“More expression of sensation or feeling than painting”). This latter distinction is important, as I have written on many previous occasions for this publication, as music has the advantage of liberating our minds from the direct representation of images. This is reflected in Beethoven’s titling of the different movements of his Pastoral Symphony, such as the First movement: Erwachung heiterer Gefühle bei der Ankunft auf dem Lande [Awakening of happy feelings at the arrival in the countryside]; the fourth movement: Gewitter [Storm]; and the fifth and final movement: Hirtengesang/Frohe und dankbare Gefühle nach dem Sturm [Song of the Shepherds/Happy and thankful feelings after the storm]. 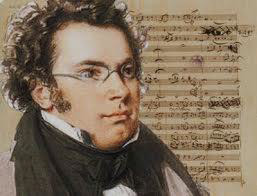 Throughout the composition, through repetitions of short musical themes, Beethoven engenders shifts in the psychological state of the listener – always descriptions of sensations rather than images. We can imagine the song of birds, the cuckoo when the clarinet plays, the quail when the flute sounds, the darkening clouds of the storm with the grave chords of the cellos and double basses, the staccato sounds of the violins as falling raindrops. Man’s tense disposition as he helplessly faces the forces of nature is emphasized, but at the end, all is well again – the natural cycle resumes and the hymn of gratitude concludes the composition. Beethoven can truly be described by the German term for composer: ‘Tondichter’ [Tone poet]. 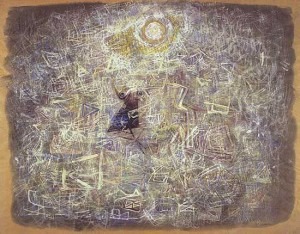 Schubert: Die Winterreise – No. 24. Der Leiermann
Hermann Prey
The painting Wanderer in the Storm by Julius von Leypold and Franz Schubert’s song cycle Die Winterreise [The Winter’s Journey’] are other examples of nature reflecting human emotion – in Schubert’s case the sensation of a voyage towards death, particularly in the song Der Leiermann [The Hurdy-Gurdy player].

In the works of 20th and 21st centuries artists, such as Morris Graves (1910-2001) and Helen Frederick (1945 – ), nature plays a very different role. In a recent exhibit of their works Intersections – Acts of Silence at the Phillips Gallery in Washington, D.C., Helen Frederick described getting her inspiration from the works of Morris Graves, who developed a spiritual bond with the landscapes of the Pacific Northwest, influenced by Buddhism and other Eastern philosophies. According to Duncan Phillips, cited by Frederick in a short video presentation — “[Morris’] contemplation of nature was one of haunting symbols that enter our mind and senses like night-sound in great stillness”. Frederick emulates this stillness in her paintings and sculptures, but surrounds her pulp prints and paintings by projected images of forests, rivers, light-based sculptures and sound pieces, which are intermittent – emphasizing presence and absence. For her, the delicate paper constructs are a sound language. They create a different, interactive and multisensory space, expanding our understanding on different level of sensation. Art here is more introspective, but, according to the artist, it also brings attention to the human impact upon and responsibility toward nature.