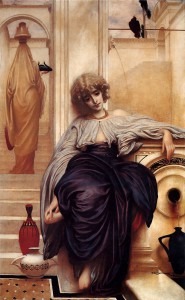 In our series on Music and Art, we’ve been looking at works of music inspired by works of art. The influence also goes the other way, where works of art have been inspired by music.

Felix Mendelssohn (1809-1847) came from a wealthy banking family in Germany. In addition to being a composer, he was also a pianist, organist and conductor. One of his most innovative creations in piano composition were his Lieder ohne Worte (Songs without Words). Songs, lieder, in the German musical world were very common, with Schubert and Schumann writing many of the most familiar ones we still know. To translate this to the world of the piano, eliminating the lyrics and the singer entirely, created a new kind of piano music. The short lyrical pieces were accessible to pianists of all skill levels and became a drawing room favorite in the Romantic era. This example from Book 2 has a meditative feeling.

Mendelssohn: Lieder ohne Worte (Songs without Words), Book 2, Op. 30: No. 7 in E-Flat Major, Op. 30, No. 1 (Péter Nagy, piano)
These works were never intended to have lyrics and Mendelssohn discouraged those who tried to set words to his melodies.

The English artist Frederic Leighton (1830-1896) was active both as a painter and sculptor. As a painter, once he moved to London in 1860, he became associated with the Pre-Raphaelites. His painting, Lieder ohne Worte, was given its title by a visitor to the artist’s studio, and was retained by Leighton when he exhibited the work in 1861.

This painting, one of the first he produced after moving to London, tries to treat music and sound the same way that Mendelssohn treated the lieder in piano music. In the painting, music and sound are shown through the blackbird, at the top of the picture, depicted in full song, and the two fountains, which would add their own distinctive noises. The fountain in the background would have a very different sound than the small fountain to the side of the girl. Another analogy in the painting to music comes from the tonal harmony of the colours used: the gold and brown that figure most predominantly are set off (or have a counterpoint) in the black of her skirt, the blackbird, the black amphora of the fountain, the design on the floor, and the design on the two pots at her side. The red pot and the girl’s red underskirt offer other accents.

The interpretation of the painting in terms of its title involves the same level of knowledge about painting as does Mendelssohn’s work in terms of knowledge about music. A knowledge of lieder and how the piano, particularly in the hands of a composer such as Schubert, gradually became more than accompaniment to voice is critical to understanding how Mendelssohn could write a song, which has to have words, as a “Song Without Words.” In the same way, Leighton could paint an image of music without sound, yet we can hear it all as we look at his work. We have the bird, the fountains, and without stretching our imagination very far, we can even catch the girl’s sigh as she sits there, slumped against the cooling pillar.