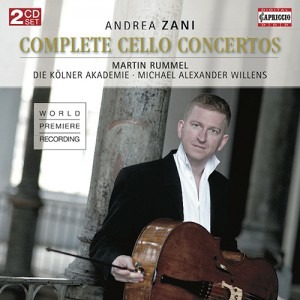 Andrea Teodoro Zani (1696–1757) was born in Casalmaggiore, a province of Cremona, long a center for famous makers of string instruments. Zani, in fact, is virtually an exact contemporary of the most famous of the Guarneris, Cremonese luthier Giuseppe Guarneri “del Gesù” (1698–1744), and of famed Italian violinist-composers, Veracini (1690–1768), Tartini (1692–1770), and Locatelli (1695–1764). It’s no surprise then that Zani trained as a violinist, and upon hearing him play, Antonio Caldara invited the young man to accompany him to Vienna, where Zani found employment in service to the Hapsburgs. But when Caldara died in 1736, Zani moved back to the town of his birth, where it’s believed he remained for the rest of his life.