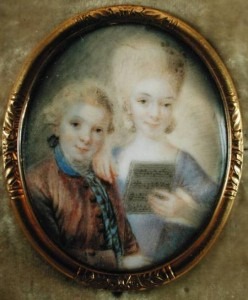 Frequently, inspiration does not come from far-flung places or idealized personalities. It is naturally found within an extended social environment or even within one’s own family! During their childhood years, Wolfgang Amadeus Mozart and his sister Maria Anna Walburga Ignatia had a very close relationship! They traveled together, and billed as musical prodigies of nature, performed for European royalty. Both children almost died during their travels! Nannerl became ill with a bronchial catarrh and then typhus fever, and her condition became so grave that Last Rites were administered. She miraculously recovered, and Wolfie soon thereafter was pushed to the brink of death by a severe sickness that was never properly diagnosed. It has been suggested that he either contracted hepatitis, relapsing fever, infectious mononucleosis or malaria. Fortunately, Wolfie survived and his father Leopold ordered 9 masses to be said in thanks. On their extended concert journeys, Nannerl was not merely a sideshow as Baron Melchior von Grimm excitedly reported, “A Kapellmeister from Salzburg, by the name of Mozart, has just arrived here with two children who cut the prettiest figure in the world. His daughter, eleven years of age, plays the harpsichord marvelously and performs the longest and most difficult pieces with impressive precision.” Encouraged by her brother, Nannerl also tried her hands at composition and sent Wolfie a Lied for evaluation. He replied from Rome in 1770, “My dear sister! I’m amazed to discover that you can compose so delightfully. In a word, your Lied is beautiful. You must compose more often.”

From their surviving letters—mostly letters written from Wolfie to his sister—it is clear that the Mozart children shared a great sense of affection, interest in good health and state of mind. Wolfgang writes from Milan in 1770, “Here I am, all yours, Mariandel, and I’m ass over tit with happiness that you had such a dreadfully fine time… a hundred kisses to you, big and small, on that marvelous horse face of yours.” On a more serious note, Wolfie occasionally lavished high praise on his sister. “I hope, oh my queen, that you are enjoying the best of health and that from time to time you would like to offer up one or your momentous and most excellent thoughts, that at every moment drop from that most fine and weighty of intellects, that you possess hand in hand with beauty, and although almost none of the above could be claimed by one of such tender years and a woman, you, oh queen, possess it all in such measure as to confound every man, even including the old ones.” To be sure, Wolfie mercilessly teased Nannerl about her love life, “Believe me, dearest sister, I am extremely serious when I say that the best cure for you would be a husband, and with all my heart I would wish you to be married soon.” In the event, Nannerl did not marry the referenced Franz Armand d’Ippold but the twice-widowed Baron Johann Baptist von Berchtold zu Sonnenberg. Eventually, and no doubt influenced by Leopold Mozart’s attempt to keep control of the family by resorting to emotional blackmail, the relationship between the siblings cooled. Disagreement became explicit and expressed itself in “the not unusual form of arguments over Leopold’s legacy.”

Wolfie usually serenaded Nannerl on her name day, and on 20 July 1778 he apologized for being late sending his musical wishes from Paris. “I know that, like me, you don’t appreciate high-sounding words and you can be sure that with all my heart I wish you every happiness, not just today, but every day, and that I wish it sincerely, as sincerely as a brother who wants the best for his sister can. I’m sorry that I haven’t been able to write a piece of music in your honor, as I did some years ago. Also, I hope that the happy time has not passed when brother and sister, once so united and devoted, can tell each other what they have on their mind and in their heart. Goodbye for now, keep well, and love me as I love you. I embrace you with all my heart and with my entire mind and I am ever your sincere and loyal brother.” The referenced work turns out to be the so-called “Nannerl Septet,” which Mozart had completed for 26 July 1776. Scored for oboe, 2 horns, 2 violins, viola and double bass, the work was subsequently transferred into the orchestral medium.