The headline tantalized— “OSM guest conductor Schiff ‘flies off the handle’ in rehearsals, musicians say. ‘The concertmaster of the Montreal Symphony, Richard Roberts, asserted, ‘I don’t think he [Sir András Schiff] is a professional conductor.’” Apparently, Schiff accused the musicians of sabotage, when after intermission, he attempted to conduct the Montrealers in Béla Bartók’s rhythmic and lyrical Dance Suite. It’s easy to blame the performers for any blunders. After all, they are audible, while the conductor never makes a sound—except when cursing the musicians.

Don’t get me wrong. Schiff is a masterful artist. Just the previous week, he was lauded in Boston for his interpretation of piano works of Bach and Beethoven. 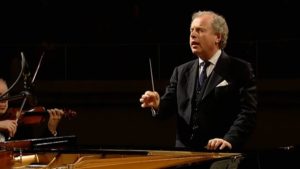 Wonderful performers have taken up the baton. In fact, it’s essential a conductor be proficient on a musical instrument first, like Dimitri Mitropoulos, Sir John Barbirolli, Pierre Monteux and Gustavo Dudamel. And if they’ve performed “in the trenches” that is, in a professional symphony orchestra, it’s a distinct advantage when they’ve had an inside understanding of how musicians do what we do. But what happens when an artist attempts both, and at the same time?

Jean-Baptiste Lully, (1632-1687), the first conductor known to stand up, used a long bulky staff, to pound on the floor to keep the rhythm. When he jammed the baton into his foot, he freakishly developed gangrene and died. In Bach and Mozart’s day it was typical for a composer to play his or her own music and lead from the keyboard or violin. The accompanying group was small—chamber orchestra sized, and the music-making was akin to chamber music where everyone takes responsibility for listening carefully and staying together. Throughout music history, composers have conducted their music including Beethoven, Berlioz, Mendelssohn, Wagner, Strauss, Stravinsky, and Copland. We have gleaned tremendous insights into how these composers intended their music to be performed despite any inconsistencies during performances.

As ensembles became larger, though, and the music more complex, experienced conductors became necessary. Composers continued to conduct, and some emerged who had the rare talent of being exemplary in two crafts—composing or performing, and conducting, such as Boulez, Mahler, Barenboim, and Bernstein. Nonetheless, even Barenboim and Bernstein rarely stayed seated at the instrument for anything musically complex. 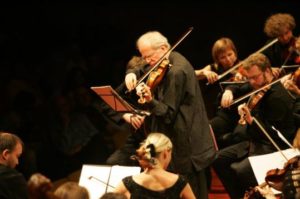 When a performer turns to conducting and has had no training that’s when we musicians balk. Many brilliant soloists have fallen short in the conducting department. Conducting an orchestra is not a matter of merely beating time so we can start and stop together, (and I’ve seen several who can’t even reliably to that.) It’s essential they learn important gestures, and body language, which will communicate complex meter changes, convey the shaping and interpretation of the music, create beauty of sound, and indicate small adjustments to the balance so prominent lines can be heard. The maestro needs to be clear, needs to have a deep understanding of the musical score, and possess at least some charisma to impart his or her conception of the music to the musicians and to the audience. More than anything, the conductor must do justice to the composer’s intentions.

May I speak for symphonic musicians? We find it annoying when a performer has undertaken to play a tricky concerto while also conducting. Whenever they can, they take one hand off their instrument to flap their arm, or even bob up and down, and if they can’t, they jerk their head. Not all the musicians can see the flailing. These extraneous motions can lead to distraction, erratic or sloppy playing, and even missed notes. In grander works on larger stages, not everyone can hear well enough to stay together. But even in small works there can be problems.

I remember a performance of Vivaldi’s Four Seasons. During this piece, there are several sections of basso continuo—customary in 17th and 18th century. The full orchestra drops out and the soloist is featured, even invited to improvise, accompanied by one cello or bass or bassoon with harpsichord, following the harmonies “continuously”. On this occasion, the violin soloist played very freely, unpredictably you might say. I was playing the solo continuo and the conductor led from, and performed the harpsichord part. Just before the performance, the conductor decided to move the harpsichord closer to the edge of the stage next to where the violinist would stand, and in front of me. Needless to say, I wasn’t able to see any cues with his back to me, despite some flapping. In terror, I conjured extra telepathy that night to second guess what the violinist might do.


I’ve experienced temper tantrums from—we call them semi-conductors—who’ve missed entire beats, plowed through fermatas or holds in the music, and forgot to bring in the orchestra after a piano cadenza. Others have conducted in 3 during a 2/4 passage. And yet when a conductor has an unclear beat the musicians are blamed for any sloppiness. 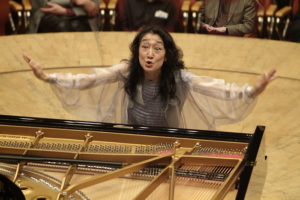 Today there are still several performers who lead small ensembles from their instrument with wonderful results. Comprised of marvelous players, these ensembles interact closely with the soloist and each other. For example, Gidon Kremer, one of the world’s leading violinists, and the Kremerata Baltica; Academy of St Martin in the Fields, one of the finest chamber orchestras, with the late violinist Iona Brown and today with acclaimed violinist Joshua Bell; the Saint Paul Chamber Orchestra with various artists in residence; and the compelling violinist Nadja Solerno Sonnenburg, with the New Century Chamber Orchestra. And there are artists who continue to perform Mozart and early Beethoven from the keyboard like Mitsuko Uchida who positions the piano within the small ensemble, but her back faces the audience.


When it comes to music of the romantic era and beyond, we prefer soloists not to multi-task. Symphony orchestras deserve professional, competent conductors, and the audience deserves quality performances.