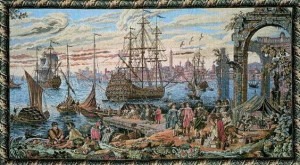 Opera as we know it today, gradually emerged from courtly entertainment. Yet, within the special social and economic environment of 17th century Venice, it escaped its regal preoccupation and was placed within reach of all but the poorest sectors of the Italian urban population. By the end of the century, Venice had 9 commercial theaters, a number of them exclusively devoted to Opera. Much of this explosive success of opera can be attributed to the brothers Faustini, who managed this new art form to previously unknown glory and popularity. Giovanni Faustini (1619-51) was the only author of his generation who confessed openly and proudly to being a professional writer of librettos. “I am not one of those who write to satisfy their whims. I strain my pen, I confess my ambition, to see if it can raise me above the ordinary and common achievements of dull and plebeian talents. This honorable madness, which began to assault me when I had scarcely emerged from swaddling clothes and has not yet abated, forces me to the assiduous creation of various compositions.”

Giovanni’s plots followed a rather predictable pattern. Usually set in Africa, they involve characters of widely contrasting social levels borrowed from the romantic tradition and included knight servants, maidens in disguise and magicians. Much of the action revolved around the romantic misadventures of two pairs of lovers of noble birth, attended by assorted comic servants. Through various complications and coincidences the lovers are separated and then reunited at the very last moment. As we all know, this literary formula became convention and shaped the basic libretti structure for centuries to come. In all, Giovanni Faustini wrote 14 libretti that were primarily set to music by the famed Francesco Cavalli. In order to guarantee the artistic integrity of his librettos and to maximize his profit from them, Giovanni Faustini the librettist became an impresario. On 19 May 1650 he signed a contract with Zanetta Piamonte to manage the newly renovated Teatro S. Apollinare for three years, with a possible extension clause for three more. To mark his official debut as an impresario, Giovanni presented Oristeo, libretto by himself and music by Cavalli. The opera Egisto and some misadventures with Doriclea followed in quick succession, and Giovanni had high hopes of moving to more majestic theaters to increase his profits. Tragically, before his dreams could be realized, he suddenly died at age 31 in 1651. 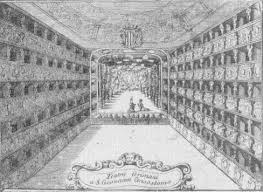 Giovanni Faustini left behind many unpaid bills and unperformed works, but luckily his brother Marco (1606-76) quickly assumed the role as impresario at S. Apollinare. Together with two new poets, Nicolò Minato and Aurelio Aureli, he became one of the most important operatic forces of the next two decades. Like his brother, he collaborated with the leading composers of his time including Francesco Cavalli, Pietro Andrea Ziani and Antonio Cesti, and hired famous singers such as Anna Renzi, Antonia Coresi and Vincenza Giulia Masotti. By the late 1650’s Venetian audiences demanded ever new productions, and Aureli famously lamented “Nowadays the people of the city of Venice have become so indifferent in their tastes for dramas that they no longer know what they want to see, nor does the intellect of the author know anymore what to invent in order to win applause of the spectators.” As the dominant impresario in the city, Marco Faustini came under enormous pressures from audiences and singers alike. Audiences demanded more arias, and singers demanded more pay! Over a period of two decades and working in three different theaters, Marco Faustini had to find solutions to these growing controversies. In planning future seasons, the hiring of singers, composers, and librettists, in competition with other theaters and patrons required greater concessions to each group. And Marco Faustini had the diplomatic touch to delicately balance competing elements, each with its own agenda. The business of opera had become much more complicated, and Marco Faustini has cleverly separated the tasks of librettist, composer, scene designer, and performer. As such he made possible the mass production of operatic works and in the process forever altered the nature of theatrical musical entertainment.