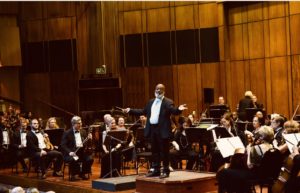 When the conductor walks on stage everyone has to be tuned and poised for the downbeat. It can come unpredictably fast. You never know if the Maestro will milk the applause for all it’s worth as they step onto the podium, or if they’ll whirl around like a spinning top and plunge into the music. That can have its disadvantages, as was noted in a concert recently in Johannesburg, South Africa.

The first concert of the summer season of the Johannesburg Philharmonic, in February was conducted by William Eddins, the American pianist and conductor. He held positions as Music Director of the Edmonton Symphony, Canada, the Associate Conductor of the Minnesota Orchestra, and Resident Conductor of the Chicago Symphony. The program opened with the lovely Rodrigo Guitar Concerto, Concierto de Aranjuez, guitar soloist, Goran Krivokapić, a native of Montenegro. 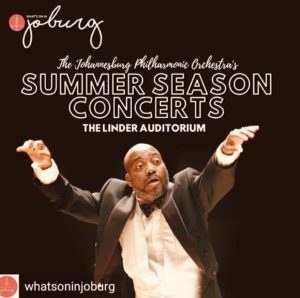 The conductor and the soloist entered and took their spots. Just as Eddins raised his arms to begin, he noticed the woodwinds wildly gesticulating, pointing to an empty seat onstage. After a few moments of confusion, he realized the second oboe/English horn chair was vacant. Many of you might know that the second movement of this concerto has a rather prominent English horn solo. What the HECK?

Mr. Eddins, quickly considering his options. “Ladies and gentlemen,” he said as he briefly explained the problem. Then turning to the guitarist—thinking every guitarist must have Bach under their fingers—he continued, “in the meantime, our guitarist will play some Bach for you.” Krivokapić, in somewhat of a predicament, could only shrug and graciously ready himself for the unexpected change of plans. 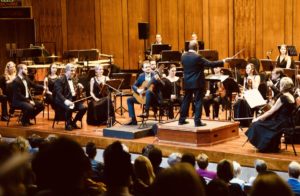 While the guitarist began to play solo Bach, Mr. Eddins hurried offstage to find the offending musician, only to discover the oboist frantically fiddling with her English horn. Finicky instruments as they can be, it had malfunctioned ten minutes prior to the concert. Mr. Eddins ordered the management to send a message to another player who lived in the vicinity. “DROP EVERYTHING AND BRING YOUR ENGLISH HORN TO THE HALL, NOW.”

As the guitarist was about to play a second Bach work, Bill returned to the stage with yet another announcement. “Ladies and gentlemen. We will rearrange the program order but don’t worry, we’ll come back to the Rodrigo…” and with that the guitarist made a hasty retreat from the stage. 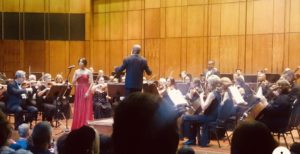 No-one would be disappointed, as Bill had other surprises planned for this concert. Zandile Mzazi, soprano, a South African prize-winning opera singer, the other soloist on the program, would be featured in arias from Jules Massenet’s opera Manon, and Léo Delibes’ Lakmé. After thrilling the audience with her shimmering voice, the audience demanded an encore. During the virtuoso aria Sempre Libera from Verdi’s La Traviata, a violist from the section stood up and while holding his viola, sang the tenor part to the famous duet. His resonant voice amazed his colleagues and the audience.

When an intact English horn was delivered, the orchestra finally performed the Rodrigo and it was beautiful. The English horn solos sounded terrific. Did I mention it was Thursday the 13th?

This year, a similar incident happened in Spain. The Orquesta Sinfónica de Castilla y León actually began the Dvořák Cello concerto, before the conductor noticed the timpani player was missing. The Maestro had to stop the music. He turned to the audience. “Ladies and Gentlemen…” and he stomped offstage to find the timpanist. But this time the musician was nowhere to be seen. The program order had to be rearranged. No-one heard an explanation when the timpanist eventually showed up. Perhaps he escaped repercussions (no pun intended) because he was chairman of the musician’s members committee? 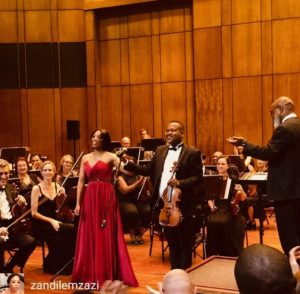 Many years ago, before my time, that was not the case here in Minnesota. Maestro Stanisław Skrowaczewski, the Music Director for decades, often waltzed onto the stage, his baton-arm extended, his head in the musical spheres of the music he was about to conduct. He’d begin conducting immediately after leaping onto the podium. His programs often featured one of the Bruckner Symphonies. This particular evening the musicians’ hearts sank when everyone noticed the timpanist was not onstage. The monumental Symphony No. 5, complete with huge resounding brass, and heart-rending melodies, begins quietly, with a slow introduction—the only one of his symphonies, which begins this way. Gentle strings with pizzicato plucking in the cellos are interrupted by pregnant pauses. The timpanist evidently didn’t hear the music begin. He tried to tip-toe onto the stage during the soft beginning, but he was too late. Three minutes into the piece, a thunderous brass chorale features the timpani and it’s simply not the same without them. What an embarrassment! After this fiasco, he was fired.


Today, many orchestras have personnel managers whose job description includes ensuring that everyone who should be, is onstage for each number on the program. They proclaim it on a loudspeaker backstage, “Onstage. Musicians Onstage for the Bruckner, or Rodrigo, or Mozart,” and just in case, they will scan the lounge area and peer through a window in the stage door to see if any players’ seats are empty. Still I think we can always count on topping this concert caper!