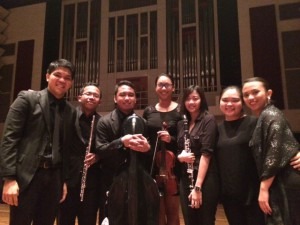 Talk about off and running. The Manila-based Ripieno Ensemble only formally launched in January, and its debut performance in February featured an ambitious repertoire: the works of modern-day music stalwarts Schoenberg and Webern as well as those of contemporary Philippine composers.

The group might be in its infancy, but it’s already a vital performing arm of the Manila Composers Lab, an organisation of Philippine composers established in 2009 by Jonas Baes, a music professor at the University of the Philippines. The Ripieno Ensemble’s seven members participating in the Hong Kong-based Modern Academy are affiliated with the University of the Philippines’ College of Music.

At the June 16th concert, the Ripieno Ensemble put forth a commanding display of deftly executed plucks and hisses joined by sudden symphonic flourishes. Villanueva’s work, based on a poem, took its early pacing from its spare stretches – at one point, for instance, Dionisio trilled without forming an embouchure – yet still registered poetic longing, especially when Quintin burst in. The intense atmospherics and self-assured performance proved the night’s artistic highlight.

Their Hong Kong sojourn caps a dazzling whirlwind. The Modern Academy’s artistic director William Lane set the wheels in motion when months ago he stumbled across an online video of the gifted ensemble. Impressed, Lane reached out to Villanueva via Facebook, and soon each member was awarded a full scholarship for the summer course, marking for many their first trip to Hong Kong.

All are classically trained and seek to deepen appreciation of new music in their native Philippines, well-known in Asia and beyond for churning out accomplished musicians. The Modern Academy experience was therefore not to be missed. Now they are among 90 enrolled students.

Each musician training at the Modern Academy has been assigned a world-class mentor specific to his or her background. Asked to describe new music’s appeal, Castro, the ensemble’s flautist, cited its depth. “It goes beyond standard harmony and melody,” he says, adding that performances can transport musicians and audiences alike to enter “a new world of many new sounds.”

Ripieno Ensemble takes its name from the baroque era-practice of musicians playing not as featured soloists but as supporting instrumentalists. The reference aptly describes the young musicians’ desire to defy conventional expectations and access themes seldom articulated.

Villanueva contends that the ensemble will champion new music, no matter how it is received. Even Beethoven was not widely accepted in his time, he notes. “Traditional classical music doesn’t explore or convey all that we want to say,” the forthright composer explains. “New music bridges that gap.”

One new composition was inspired by the efforts of indigenous Filipinos whose rights have been under threat by mining companies. It’s just one example of the fertile ground that Ripieno Ensemble aims to plough.

“The struggle brings out creativity,” says Villanueva of composing and performing music that reflects the times. “New music is forward-looking. What we’re doing is the future of music.”