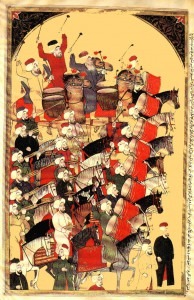 During its days of largest expansion and influence in the 17th century, the Ottoman Empire controlled much of Southeastern Europe, the Middle East and Northern Africa. Remaining a constant military threat to Central Europe over several centuries, Turkish troops famously laid siege to Vienna in 1529, and again in 1683. According to legend, the invention of the Croissant—imitating the distinct crescent symbol of the Ottoman Empire—and the establishment of the first Viennese coffeehouse were the direct culinary outcome of these adversarial encounters. Regardless whether such gastronomic claims are valid or not, they do underscore a Viennese fascination with various aspects of Turkish culture. In fact, throughout Western Europe, it became highly fashionable to incorporate ‘exotic’ elements appropriated from Turkish art, into local architecture, sculpture and music.

In particular, the music of Turkish military bands—expertly performed by the uniformed infantry units known as Janissaries—held a powerful fascination for composers far and wide. Haydn, Beethoven and Mozart wrote music that reflected the spirited, powerful, and colorful properties of these distinctive military marches. Within the context of music, this meant an expansion of the orchestra to include the bass drum, the triangle, cymbals and the piccolo flute, and references to characteristic march rhythms, accentuated by melody instruments playing grace notes on the beat. What is more, the territorial and cultural intersections of the Islamic lands and the Christian civilization of Europe gave rise to a number of theatrical and operatic productions, foremost among them the Die Entführung aus dem Serail (The Abduction from the Seraglio) by Wolfgang Amadeus Mozart.

Wolfgang Amadeus Mozart: Entführung aus dem Serail, KV. 384
This colorful comedy tells the charming antics of Belmonte and Pedrillo—a master and his servant—who must rescue their beloved brides from the harem of Pasha Selim. Even more importantly than the differing personifications of sexual norms, however, was the fact that a company tellingly named “Nationalsingspiel” (National Singspiel) sponsored the work. A pet project of the Austrian Emperor Joseph II, the company was specifically established to perform works in the German language. Mozart was decidedly excited about the project, and started to articulate his views in a letter to his father dated 13 October 1781. “I would say that in an opera the poetry must be altogether the obedient daughter of the music. Why are Italian comic operas popular everywhere – in spite of the miserable libretti? Because the music reigns supreme, and when one listens to it all else is forgotten. An opera is sure of success when the plot is well worked out, the words written solely for the music and not shoved in here and there to suit some miserable rhyme. The best thing of all is when a good composer, who understands the stage and is talented enough to make sound suggestions, meets an able poet; in that case, no fears need be entertained as to the applause – even of the ignorant.”

Significantly, Mozart took a heightened interest in shaping the libretto, insisting that Gottlieb Stephanie makes changes for dramatic and musical effect. Mozart writes, “Everyone abuses Stephanie. It may be the case he is only friendly to my face. But after all he is preparing the libretto for me – and, what is more, exactly as I want it – and by Heaven, I don’t ask anything more of him.” The work was eventually finished in the summer of 1782, and premiered at the Burgtheater in Vienna. The Emperor was in the audience and famously said, “Too many notes my dear Mozart. Just cut a few and it will be perfect.” The Emperor’s establishment of the Nationalsingspiel had two primary objectives; to improve the standard of living of the lower classes and to create a strong, unified German nation. In the end, the project was considered a failure, but Mozart’s Abduction nevertheless offers a worthy introduction to the 18th-century fascination with Turkish culture combined with the subtleties and conventions of the German Singspiel. And as always, there is Mozart’s glorious music!

Die Entführung aus dem Serail will be performed at the Festival d’Aix en Provence in July 2015.