Blog
What is a Concertmaster?
by Maureen Buja June 17th, 2015 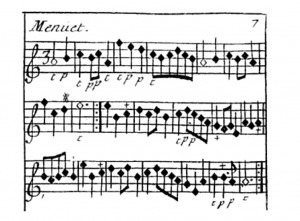 Sometimes the actions of an orchestra seem quite mysterious. You’d expect that the orchestra would come on stage, take their seats, the conductor would arrive, and off they’d play. Instead, the orchestra seats itself, and then the first chair of the violin section comes on, turns his back to the audience, and a note rings out over the orchestra. What’s going on?

The first chair of the first violin section occupies a role called the “Concertmaster.” He is responsible for the conduct of the orchestra in all aspects. He gets the orchestra tuned based on the pure clear note from the oboe section and must listen to each section as they match the pitch. If he’s not happy with a section’s sound, then he can call again for the oboe to give a note and has the section tune individually. You’ll hear that he tunes the strings and the winds separately.

The concertmaster has other responsibilities: he has to ensure that the markings in each string player’s score are identical. These marks are called the bowings and determine exactly how a note is to be played, i.e., whether a note is played with the bow going to the left (up-bow) or the right (down-bow). In old French, these would have been the words ‘tire’ (draw) for a down-bow, and ‘pousse’ (push) for an up-bow.

Now, other symbols are used, mostly because putting letters into the score gets things confused with other score markings such as dynamics, where ‘p’ means ‘piano’ or ‘soft.’

The coordination of the bowings is important because there are subtle differences in the violin’s sound based on the direction of the bow. In modern orchestral playing, all players should be bowing the same direction at the same time. Violinists have a stronger down-bow than up-bow and composers may use this difference to emphasize different parts of the violin passages. 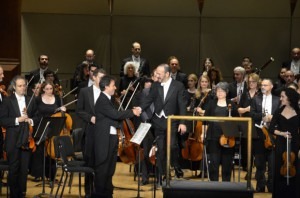 In a concert band, where there is no violin section, the role of concertmaster is generally taken on by the first clarinetist, who sits in the same position in relation to the conductor as the violin concert master does: just on the conductor’s left, closest to the audience.

So, the next time you go to an orchestra or band concert, see who stands between the mass of the orchestra and the conductor. That’s the concertmaster and it’s a very important position!